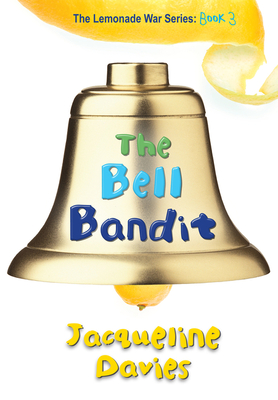 This is book number 3 in the The Lemonade War Series series.

Everything about this trip to Grandma’s house was different:

First, because of the fire, Mrs. Treski, Evan, and Jessie had driven up to Grandma’s two days after Christmas instead of the day before, missing Christmas with Grandma entirely.

Second, the fire had left a hole in the back kitchen wall big enough to drive a car through! And with Grandma in the hospital and not in her house, everything felt off.

Third, someone had climbed the long, slow slope of Lovell Hill to the top and had stolen the old iron bell hanging on its heavy wooden crossbeam.

Who on earth would steal the New Year’s Bell? And how could Grandma, Mrs.Treski, Evan, Jessie, and their neighbors ring in the New Year without it?

Like a modern-day Beverly Cleary, Ms. Davies writes with heart, humor, and honesty about the inevitability of profound change and reveals just how well she understands the complex emotions of the children.

Jacqueline Davies is the talented writer of several novels and picture books, including The Lemonade War series, the Sydney & Taylor series, and The Boy Who Drew Birds. Ms. Davies lives in Needham, Massachusetts, with her family.

"Davies' real talent is human relationships." —Betsy Bird, New York Public Library and Fuse#8 blog "Davies keeps a tight focus on the children: Points of view switch between Evan, with his empathetic and emotional approach to understanding his world, and Jessie, for whom routine is essential and change a puzzle to be worked out. . . . Each of the siblings brings a personal resilience and heroism to the resolution."  —Kirkus