The Edge Chronicles 1: Beyond the Deepwoods (Paperback) 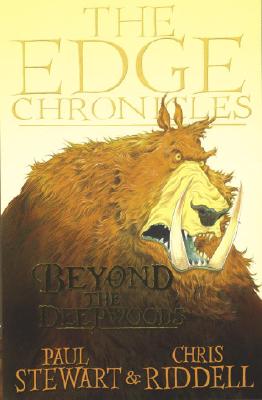 Reissued in a stunning new cover look, the first in the Twig sequence of the Edge Chronicles.
Young Twig lives in the Deepwoods, among the woodtrolls, but he isn't one of them. In a brave attempt to find out where he truly belongs, Twig wanders into the mysterious, fascinating and sometimes hazardous world beyond the Deepwoods. In his travels he encounters myriad peculiar creatures, like his wise guardian, the caterbird; the slaughterers, a peaceful race who butcher animals for their livelihood; and the vicious, bile-swilling rotsucker.

Always mindful of the Gloamglozer, whose presence haunts the thoughts of all the inhabitants of the Edge, Twig pursues his quest until he discovers his roots, not among the trees, but in the skies. With his new allies, the sky pirates, Twig prepares to embark on his next adventure.

PAUL STEWART and CHRIS RIDDELL are the creators of the hugely successful "Edge Chronicles," which have sold over two million copies and have been translated into over thirty languages worldwide. Their other collaborations include the Barnaby Grimes series and the "Far Flung Adventures," the first of which, "Fergus Crane," won the 2004 Gold Smarties Prize.

PAUL STEWART is the author of a number of previous titles for children including "The Midnight Hand "and "The Wakening" (a Federation of Children's Book Groups Pick of the Year).

PRAISE FOR THE EDGE CHRONICLES:

"Sure to please the Potter fans."
–Detroit Free Press

"The narrative will cast a spell over readers from the beginning with its utterly odd, off-kilter sense of logic and a vocabulary that is equal parts Dr. Seuss and Lewis Carroll."
–Publishers Weekly

“A richly inventive fantasy . . . one of the most exciting collaborations between a writer and illustrator for a long time.”—The Literary Review (UK)