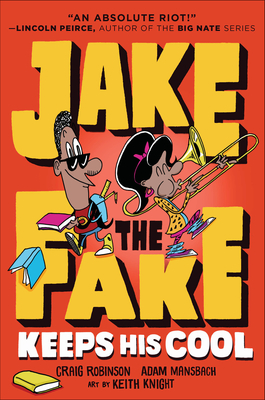 For fans of Diary of a Wimpy Kid and Big Nate comes the third book in this laugh-out-loud series about a class clown faking his way through middle school from comedian and film star Craig Robinson, #1 New York Times bestselling author Adam Mansbach, and NAACP History Maker recipient and cartoonist Keith Knight.

Life couldn't be better for Jake. He's a student at Music and Arts Academy and a budding comedian, and he finally put an end to his fake-ster ways . . . or so he thought. There's a new girl at school, and Jake would do anything to impress her, even pretending to be a master chef. And a world-renowned barber?

But at home, Jake is less impressed with his mom's news: she's pregnant. Now Jake has to fake being happy about becoming the Middle Child. The King of Cool is about to drop his chill.

Luckily, he has good friends and laughs on his side, along with more than two hundred illustrations--all about him!

Craig Robinson is an actor and a musician best known for his work on NBC's The Office and for his appearances in such films as Hot Tub Time Machine, This Is the End, Pineapple Express, and Morris from America, which previewed to high critical praise at Sundance.

Adam Mansbach is the #1 New York Times bestselling author of Go the F to Sleep. He has also written over a dozen other books as well as the screenplay for the movie Barry, about President Barack Obama as a college student. His work has appeared in the New Yorker, the New York Times, and Esquire, and on NPR's This American Life and All Things Considered.

Keith Knight is the recipient of the NAACP History Maker award and the creator of three highly regarded comic strips: The Knight Life, (th)ink, and The K Chronicles. His art has appeared in various publications worldwide.

"A fast and funny alternative to the Wimpy Kid." —Kirkus Reviews

"Robinson and Mansbach amp up the laughs in this wry novel." —Booklist

"Jake showcases an unforgettable kid whose imagination will blow your mind." —Essence

"Jake wouldn't worry about making it through sixth grade if he knew the all-star team he has behind his adventures. The laughs you'll have reading this book are definitely not fake!" —Jeffrey Brown, author of Lucy & Andy Neanderthal and Jedi Academy

"Everything about this book is funny. OK, maybe not the page numbers. But the words and pictures are hilarious; I laughed until boogers came out of my nose. (Don't worry, I put them back.)" —Dave Barry, author of Worst Class Trip Ever