China's Wings: War, Intrigue, Romance, and Adventure in the Middle Kingdom During the Golden Age of Flight (Hardcover) 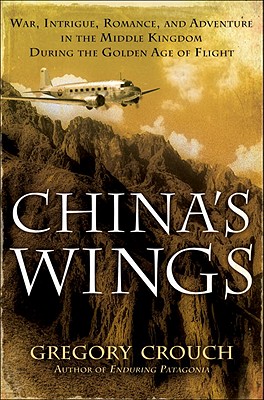 By Gregory Crouch
This item is not available.
Hard to Find

From the acclaimed author of Enduring Patagonia comes a dazzling tale of aerial adventure set against the roiling backdrop of war in Asia. The incredible real-life saga of the flying band of brothers who opened the skies over China in the years leading up to World War II—and boldly safeguarded them during that conflict—China’s Wings is one of the most exhilarating untold chapters in the annals of flight.

At the center of the maelstrom is the book’s courtly, laconic protagonist, American aviation executive William Langhorne Bond. In search of adventure, he arrives in Nationalist China in 1931, charged with turning around the turbulent nation’s flagging airline business, the China National Aviation Corporation (CNAC). The mission will take him to the wild and lawless frontiers of commercial aviation: into cockpits with daredevil pilots flying—sometimes literally—on a wing and a prayer; into the dangerous maze of Chinese politics, where scheming warlords and volatile military officers jockey for advantage; and into the boardrooms, backrooms, and corridors of power inhabited by such outsized figures as Generalissimo and Madame Chiang Kai-shek; President Franklin Delano Roosevelt; foreign minister T. V. Soong; Generals Arnold, Stilwell, and Marshall; and legendary Pan American Airways founder Juan Trippe.

With the outbreak of full-scale war in 1941, Bond and CNAC are transformed from uneasy spectators to active participants in the struggle against Axis imperialism. Drawing on meticulous research, primary sources, and extensive personal interviews with participants, Gregory Crouch offers harrowing accounts of brutal bombing runs and heroic evacuations, as the fight to keep one airline flying becomes part of the larger struggle for China’s survival. He plunges us into a world of perilous night flights, emergency water landings, and the constant threat of predatory Japanese warplanes. When Japanese forces capture Burma and blockade China’s only overland supply route, Bond and his pilots must battle shortages of airplanes, personnel, and spare parts to airlift supplies over an untried five-hundred-mile-long aerial gauntlet high above the Himalayas—the infamous “Hump”—pioneering one of the most celebrated endeavors in aviation history.

A hero’s-eye view of history in the grand tradition of Lynne Olson’s Citizens of London, China’s Wings takes readers on a mesmerizing journey to a time and place that reshaped the modern world.

Gregory Crouch graduated from West Point, where he studied military history. He completed U.S. Army Airborne and Ranger schools and led an infantry platoon in Panama, for which he earned the Combat Infantryman’s Badge. He left the Army to pursue other interests, most notably in mountaineering and surfing, and his work has appeared in National Geographic, American History, Outside, Climbing, and Mother Jones, among many publications. The author of Enduring Patagonia, Gregory Crouch lives in the San Francisco Bay Area.

“Too many people think the war in the Pacific began with Japan’s sudden strike on Hawaii, launched seemingly out of nowhere. Crouch’s vividly written book explains how America’s business interests in 1930s China set it on the path to Pearl Harbor. This is the rousing story of the enterprising Pan Am pilots who built a frontier airline and went on to become aviation heroes, flying over the Himalayas, helping save China, and thereby transforming the world.”—James D. Hornfischer, New York Times bestselling author of The Last Stand of the Tin Can Sailors and Neptune’s Inferno

“In China’s Wings, Gregory Crouch recalls the remarkable encounter between an ancient civilization and the most modern technology in the world, as intrepid Americans and their Chinese partners struggled to establish a sophisticated air network over a vast land that barely knew electricity. This gripping book will transport you to a fascinating lost time.”—James Bradley, #1 New York Times bestselling author of Flags of Our Fathers and The Imperial Cruise