The Speckled Beauty: A Dog and His People (Paperback) 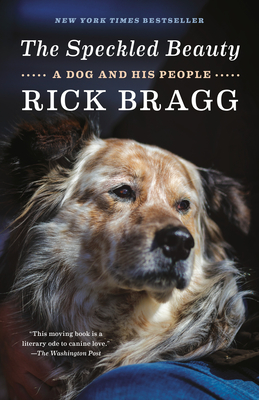 NEW YORK TIMES BEST SELLER • From the best-selling, Pulitzer Prize-winning author of All Over but the Shoutin', the warmhearted and hilarious story of how his life was transformed by his love for a poorly behaved, half-blind stray dog.

Speck is not a good boy. He is a terrible boy, a defiant, self-destructive, often malodorous boy, a grave robber and screen door moocher who spends his days playing chicken with the Fed Ex man, picking fights with thousand-pound livestock, and rolling in donkey manure, and his nights howling at the moon. He has been that way since the moment he appeared on the ridgeline behind Rick Bragg's house, a starved and half-dead creature, seventy-six pounds of wet hair and poor decisions.

Speck arrived in Rick's life at a moment of looming uncertainty. A cancer diagnosis, chemo, kidney failure, and recurring pneumonia had left Rick lethargic and melancholy. Speck helped, and he is helping, still, when he is not peeing on the rose of Sharon. Written with Bragg's inimitable blend of tenderness and sorrow, humor and grit, The Speckled Beauty captures the extraordinary, sustaining devotion between two damaged creatures who need each other to heal.

Rick Bragg is the author of twelve books, including the best-selling Ava’s Man and All Over but the Shoutin’. He writes a monthly column for Southern Living, teaches writing at the University of Alabama, and is also a regular contributor to Garden & Gun magazine. He lives in Alabama.

“This is a witty, moving love letter to one extraordinary dog—and an ode to the transformative powers of his kind.” —People

“This moving book is a literary ode to canine love.” —The Washington Post

“Pulitzer Prize-winning memoirist Rick Bragg (The Best Cook in the World; My Southern Journey) grew out of rural Southern poverty, but the spirit of his storytelling has made him—and legions of readers—rich beyond measure . . . Amid dark days, bright Speck shows up at just the right time. How fortunate for readers that the joy of his presence—enhanced by the wit and wisdom of Bragg's inimitable prose—will resonate far beyond the Bragg homestead.” —Kathleen Gerard, Shelf Awareness

“If you’re a dog lover and want to treat yourself to a beautifully written story that will make your whole self smile, read this memoir by Rick Bragg. His writing is so powerful that it made my heart weep. Savor this book.” – Florida Times-Union

“I knew from the beginning that I would love The Speckled Beauty, but I did not realize just how much. Once I began this memoir, I did not want to put it down. Though Speck is the center of the story, Bragg’s compassionate portraits of his family members made me love them all. As the family grows and changes, so too does Speck, and Bragg creates a profoundly moving tableau.” —Ashley Riggleson, The Fredericksburg Free Lance-Star

“Bragg has done it again, focusing his lyrical prose on one aspect of his Southern roots while managing to embrace much larger terrain in the process . . . [The Speckled Beauty] delights the senses and is as honest as the day is long.”
—David Holahan, USA Today

“Bragg's descriptions are vivid, his use of colorful place names is enchanting, and while the story is Speck's, whenever Bragg turns the camera on himself you find you like and empathize with him a little more each time . . . ‘My people think a good story will fix just about anything,’ Bragg writes, and in this case it might actually be true.”
—Laurie Hertzel, Minneapolis Star Tribune

“Bragg's story will resonate with dog lovers and with his many fans, who will recognize this book's enjoyably colloquial tone from his monthly essays in Southern Living magazine.”
—Susan Riley, Library Journal [starred review]