How Civil Wars Start: And How to Stop Them (Hardcover) 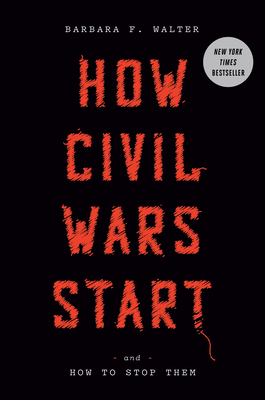 THE SUNDAY TIMES BOOK OF THE YEAR • ONE OF THE BEST BOOKS OF THE YEAR: Financial Times, The Times (UK), Esquire, Prospect (UK)

Political violence rips apart several towns in southwest Texas. A far-right militia plots to kidnap the governor of Michigan and try her for treason. An armed mob of Trump supporters and conspiracy theorists storms the U.S. Capitol. Are these isolated incidents? Or is this the start of something bigger? Barbara F. Walter has spent her career studying civil conflict in places like Iraq, Ukraine, and Sri Lanka, but now she has become increasingly worried about her own country.

Perhaps surprisingly, both autocracies and healthy democracies are largely immune from civil war; it’s the countries in the middle ground that are most vulnerable. And this is where more and more countries, including the United States, are finding themselves today.

Over the last two decades, the number of active civil wars around the world has almost doubled. Walter reveals the warning signs—where wars tend to start, who initiates them, what triggers them—and why some countries tip over into conflict while others remain stable. Drawing on the latest international research and lessons from over twenty countries, Walter identifies the crucial risk factors, from democratic backsliding to factionalization and the politics of resentment. A civil war today won’t look like America in the 1860s, Russia in the 1920s, or Spain in the 1930s. It will begin with sporadic acts of violence and terror, accelerated by social media. It will sneak up on us and leave us wondering how we could have been so blind.

In this urgent and insightful book, Walter redefines civil war for a new age, providing the framework we need to confront the danger we now face—and the knowledge to stop it before it’s too late.

Barbara F. Walter is the Rohr Professor of International Relations at the School of Global Policy and Strategy at the University of California, San Diego. A life member of the Council on Foreign Relations, Walter helps to run the award-winning blog Political Violence at a Glance and has written for The Washington Post, The Wall Street Journal, Los Angeles Times, Reuters, and Foreign Affairs.

“I wish all the [January 6] committee members would read [How Civil Wars Start] if only to expand their imaginations. [Barbara F. Walter] demonstrates that the conditions for political violence are already all around us.”—David Brooks, The New York Times

“How Civil Wars Start is a stop sign for us—and an imperative book for our time. The evidence-based preventative measures could not be more urgent. Read and act.”—Ibram X. Kendi, author of How to Be an Antiracist

“[A] bracing manual . . . Walter’s book lays out America’s possible roads to dystopia with impressive concision. Her synthesis of the various barometers of a country heading to civil war is hard to refute when applied to the U.S. . . . Indispensable.”—Financial Times

“Like those who spoke up clearly about the dangers of global warming decades ago, Walter delivers a grave message that we ignore at our peril.”—The New Yorker

“As a political scientist who has spent her career studying conflicts in other countries, [Walter] approaches her work methodically, patiently gathering her evidence before laying out her case.”—The New York Times

“I’ve been skeptical of the notion that the United States is on the verge of another civil war. Walter has made me reconsider. . . . This is a book that everyone in power should read immediately.”—The Washington Post

“The popular theory that the world is becoming more peaceful is an illusion. This is a clearly written and enormously important book. Be afraid.”—The Times(U.K.)

“One of the year’s most persuasively pessimistic books.”—Prospect magazine

“Drawing on her deep understanding of the causes of intra-state violence . . . Barbara F. Walter argues, chillingly, that many of the conditions that commonly precede civil wars are present today in the United States.”—Steven Levitsky and Daniel Ziblatt, authors of How Democracies Die

“How Civil Wars Start is a sobering but engrossing book. It is so tempting to ignore or deny Walter’s carefully researched and reasoned conclusions, which is precisely the response she is warning us against. . . . Highly recommended for anyone interested in preserving American democracy.”—Anne-Marie Slaughter, president and CEO, New America

“This engaging book from one of the country’s most authoritative scholars of civil wars is a dire warning. Governing amid diversity is an incredible challenge, and this book is an important guide to preserving our democracy.”—Kori Schake, Director of Foreign and Defense Policy Studies, American Enterprise Institute

“How Civil Wars Start brilliantly illuminates the history of civil wars and the profound dangers to our union today, serving as both a warning about the stakes in our politics and a call to action.”—Ben Rhodes, author of After the Fall