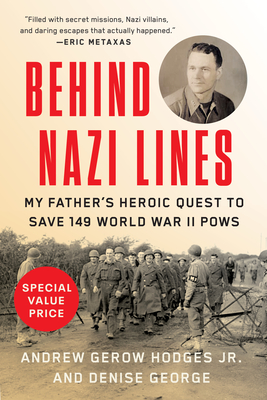 Now in paperback at a special value price, the true story of World War II American Red Cross volunteer Andrew Hodges, who traveled behind enemy lines to negotiate the release of 149 Allied prisoners of war.

In 1944, hundreds of Allied soldiers were trapped in POW camps in occupied France. The odds of their survival were long. The odds of escaping, even longer. But one man had the courage to fight the odds...

An elite British S.A.S. operative on an assassination mission gone wrong. A Jewish New Yorker injured in a Nazi ambush. An eighteen-year-old Gary Cooper lookalike from Mobile, Alabama. These men and hundreds of other soldiers found themselves in the prisoner-of-war camps off the Atlantic coast of occupied France, fighting brutal conditions and unsympathetic captors. But, miraculously, local villagers were able to smuggle out a message from the camp, one that reached the Allies and sparked a remarkable quest by an unlikely—and truly inspiring—hero. Andy Hodges had been excluded from military service due to a lingering shoulder injury from his college-football days. Devastated but determined, Andy refused to sit at home while his fellow Americans risked their lives, so he joined the Red Cross, volunteering for the toughest assignments on the most dangerous battlefields.

In the fall of 1944, Andy was tapped for what sounded like a suicide mission: a desperate attempt to aid the Allied POWs in occupied France—alone and unarmed, matching his wits against the Nazi war machine. But, despite the likelihood of failure, Andy did far more than deliver much-needed supplies. By the end of the year, he had negotiated the release of an unprecedented 149 prisoners—leaving no one behind. This is the true story of one man's selflessness, ingenuity, and victory in the face of impossible adversity.

Andrew G. Hodges, M.D., is the firstborn son of World War II hero Andrew Gerow Hodges. He is a board-certified psychiatrist in private practice and has served as assistant clinical professor of psychiatry at the University of Alabama at Birmingham School of Medicine. Dr. Hodges has helped pioneer a breakthrough to the brilliant unconscious mind, which he explained in his groundbreaking book, The Deeper Intelligence. Criminal investigators and journalists have sought Dr. Hodges' expertise in cases ranging from the murder of JonBenet Ramsey to the disappearance of Natalee Holloway. He lives in Birmingham, Alabama, with his family.

Denise George is an author, teacher, and speaker. She has written or co-written twenty-seven books, including The Secret Holocaust Diaries: The Untold Story of Nonna Bannister; While the World Watched: A Birmingham Bombing Survivor Comes of Age During the Civil Rights Movement; and The Gentle Giant of Dynamite Hill: The Untold Story of Arthur Shores and His Family's Fight for Civil Rights. Her work has been published in numerous magazines, journals, and newspapers. She is married to author Dr. Timothy George and lives in Birmingham, Alabama.

“Filled with secret missions, Nazi villains, and daring escapes that actually happened, Behind Nazi Lines is thrilling, epic, inspiring—and have we mentioned true? Andy Hodges is a real hero whose story must never be forgotten.”—Eric Metaxas, New York Times bestselling author of Miracles and Bonhoeffer

“A riveting and action-packed story, Behind Nazi Lines takes you inside a Nazi POW camp in 1944 German-occupied France and shows how one brave American Red Cross volunteer negotiated the release of 149 Allied POWs. A great read.”—Marcus Brotherton, author of Shifty's War

“One of the most intriguing books I have read on WWII…A fascinating book about one of America’s unsung heroes in the European Theater…Captivating and nearly impossible to put down. I recommend it with enthusiasm to professional historians, history buffs, and anyone who wants to be inspired and entertained.”—Lyle W. Dorsett, author of Serving God and Country

“What a page-turner! It reads like a good novel, but it is all true. ”—Private First Class Bernard Rader, K Company, 301st Regiment, 94th Division

“A fascinating story of the courageous efforts to rescue POWs held by the Third Reich. Andy's story is one of great courage, risks, sacrifice, and commitment to a transcendent cause. He was a hero who risked his life to bring his fellow Americans home with honor.”—Lt. Gen. William “Jerry” Boykin, former commander U.S. Army's Delta Force