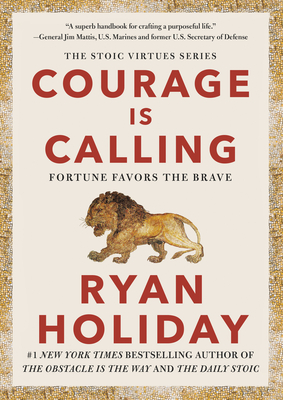 Ryan Holiday’s bestselling trilogy—The Obstacle Is the Way, Ego is the Enemy, and Stillness is the Key—captivated professional athletes, CEOs, politicians, and entrepreneurs and helped bring Stoicism to millions of readers. Now, in the first book of an exciting new series on the cardinal virtues of ancient philosophy, Holiday explores the most foundational virtue of all: Courage.

Almost every religion, spiritual practice, philosophy and person grapples with fear. The most repeated phrase in the Bible is “Be not afraid.” The ancient Greeks spoke of phobos, panic and terror. It is natural to feel fear, the Stoics believed, but it cannot rule you. Courage, then, is the ability to rise above fear, to do what’s right, to do what’s needed, to do what is true. And so it rests at the heart of the works of Marcus Aurelius, Aristotle, and CS Lewis, alongside temperance, justice, and wisdom.

You’ll also delve deep into the moral dilemmas and courageous acts of lesser-known, but equally as important, figures from ancient and modern history, such as Helvidius Priscus, a Roman Senator who stood his ground against emperor Vespasian, even in the face of death; Frank Serpico, a former New York City Police Department Detective who exposed police corruption; and Frederick Douglass and a slave named Nelly, whose fierce resistance against her captors inspired his own crusade to end slavery.

We need you to step into the arena and fight.

Ryan Holiday is one of the world's bestselling living philosophers. His books like The Obstacle Is the Way, Ego Is the Enemy, The Daily Stoic, and the #1 New York Times bestseller Stillness Is the Key appear in more than 40 languages and have sold more than 4 million copies. Together, they've spent over 300 weeks on the bestseller lists. He lives outside Austin with his wife and two boys...and a small herd of cows and donkeys and goats. His bookstore, The Painted Porch, sits on historic Main St in Bastrop, Texas.

"Worthy for anyone trying to develop their own code, this is a superb handbook for crafting a purposeful life. Masterfully composed and highly readable, using stories from antiquity to the modern-day realities confronting all leaders, the 'march' of the chapters brings forward valuable gems on each page of the journey. Holiday’s themes will remain with you and strengthen you long after you finish reading it."
--General Jim Mattis, U.S. Marines (ret.) and 26th US Secretary of Defense

"Ryan Holiday’s Courage is Calling traces the history of courage and its many faces through the ages and arrives at the present day with an urgent call to arms for each and all of us. As we battle our enemies within and without, will we choose to rise-up to the call of our courage or blush and bow down to the whispers of our cowardice? Our answer to this question is about more than our sense of duty, it’s about our freedom. It’s about more than wins and losses, it’s about our survival. It’s on me, it’s on you, it’s on us. Take the dare we may."
--Matthew McConaughey, Academy Award Winning Actor and New York Times #1 best-selling author

“[Courage Is Calling] dresses us with the proper garments of courage, something we need more than ever.”
--George Raveling, Hall of Fame Basketball coach, Nike’s first Director of International Basketball

“Ryan Holiday shows his own courage in this book to not toe the line, to speak truth to power, and show us all why we must not defer to fear if we are to go forward together with grace and humanity.  Drawing on examples across history--from the ancient Greek and Roman world to Florence Nightingale to his own critique of ‘hollow courage’ in our own times, Holiday shows why virtue matters now more than ever.”
--Nancy Sherman, Professor of Philosophy at Georgetown University

"In a world full of people riddled with fears and deeply afraid of sticking their necks out, our salvation lies in cultivating courage in all arenas of life. In this book Ryan Holiday has provided a clear and inspiring guide for how to develop this highest of human virtues."
--Robert Greene, #1 New York Times bestselling author of The 48 Laws of Power

“In this clarion call to act on your convictions, Holiday draws on a remarkable range of figures from Socrates to Solzhenitsyn. A heartfelt and passionate book.”
--Shadi Bartsch, Classics Professor at the University of Chicago