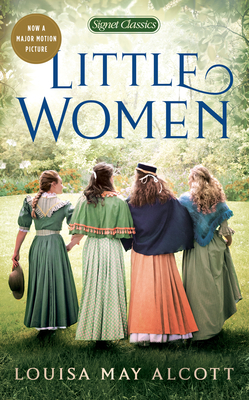 By Louisa May Alcott, Regina Barreca (Introduction by), Susan Straight (Afterword by)
$6.99
We Can Order This For You

Louisa May Alcott shares the innocence of girlhood in this classic coming of age story about four sisters—Meg, Jo, Beth, and Amy.

In picturesque nineteenth-century New England, tomboyish Jo, beautiful Meg, fragile Beth, and romantic Amy are responsible for keeping a home while their father is off to war. At the same time, they must come to terms with their individual personalities—and make the transition from girlhood to womanhood. It can all be quite a challenge. But the March sisters, however different, are nurtured by their wise and beloved Marmee, bound by their love for each other and the feminine strength they share. Readers of all ages have fallen instantly in love with these Little Women. Their story transcends time—making this novel endure as a classic piece of American literature that has captivated generations of readers with their charm, innocence, and wistful insights.

This Signet Classics edition contains Little Women in its entirety, including Parts I and II.

Louisa May Alcott was born in Germantown, Pennsylvania, in 1832, the second of four daughters of Abigail May Alcott and Bronson Alcott, the prominent Transcendentalist thinker and social reformer. Raised in Concord, Massachusetts, and educated by her father, Alcott early on came under the influence of the great men of his circle: Emerson, Hawthorne, the preacher Theodore Parker, and Thoreau. From her youth, Louisa worked at various tasks to help support her family: sewing, teaching, domestic service, and writing. In 1862, she volunteered to serve as an army nurse in a Union hospital during the Civil War— an experience that provided her material for her first successful book, Hospital Sketches (1863). Between 1863 and 1869, she published several anonymous and pseudonymous Gothic romances and lurid thrillers. But fame came with the publication of her Little Women (1868– 69), a novel based on the childhood adventures of the four Alcott sisters, which received immense popular acclaim and brought her financial security as well as the conviction to continue her career as a writer. In the wake of Little Women’s popularity, she brought out An Old- Fashioned Girl (1870), Little Men(1871), Eight Cousins (1875), Rose in Bloom (1876), Jo’s Boys (1886), and other books for children, as well as two adult novels, Moods (1864) and Work (1873). An active participant in the women’s suffrage and temperance movements during the last decade of her life, Alcott died in Boston in 1888, on the day her father was buried.

Regina Barreca is a professor of English and feminist theory at the University of Connecticut. She is the editor of seven books, including The Penguin Book of Women's Humor, and the author of four others. She writes frequently for the New York Times, Chicago Tribune, and Hartford Courant.

Susan Straight is the author of six novels, including A Million Nightingales and the National Book Award finalist Highwire Moon. She has written for The New York Times Magazine, the Los Angeles Times, Harper’s Magazine, and NPR’s All Things Considered. Her short stories have won an Edgar Award and an O. Henry Award. She teaches at the University of California, Riverside.