ReThink the Internet: How to Make the Digital World a Lot Less Sucky (Hardcover) 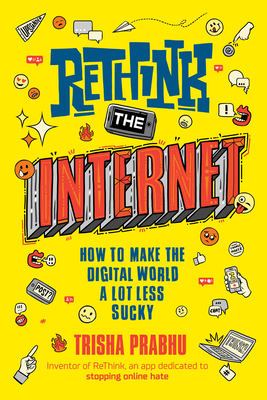 Stop hate. Promote Kindness. Be an Upstander.
ReThink the Internet.

Do you have to ask someone’s permission before posting their photo?
How can you tell if something on the internet is true?
What should you do if you see someone bullying a friend online (or #IRL)?

In a series of fun stories, innovator, inventor, social entrepreneur, and upstanding digital citizen Trisha Prabhu goes through the hows, the whats, and the whys of digital citizenship, showing readers how to lead with kindness and stop internet hate.

For people who are just getting their first phone to others who have been scrolling, swiping, clicking and posting for years, this book makes us all consider what our role is in the digital world and how, together, we can make it a force for good.

Trisha Prabhu is a twenty-year-old innovator, social entrepreneur, global advocate, and inventor of ReThink™, a patented technology and an effective way to detect and stop online hate. As a victim of cyberbullying herself, Trisha was shocked, heartbroken, and outraged. Deeply moved to action by the silent pandemic of cyberbullying and passionate to end online hate, Trisha created the patented technology product ReThink™, which detects and stops online hate at the source, before the bullying occurs, before the damage is done. Her globally acclaimed research has found that with ReThink™, adolescents change their mind 93 percent of the time and decide not to post an offensive message.

As a CEO and social entrepreneur, Trisha has received worldwide acclaim in the business world. In 2016, President Obama and the U.S. State Department invited Trisha to the Global Entrepreneurship Summit, to showcase her work and share her story with other entrepreneurs. Not long after, ReThink™ was featured on ABC's hit TV show, Shark Tank. In 2019, ReThink™ was the winner of Harvard University's President's Global Innovation Challenge & Harvard College's i3 Innovation Challenge. Trisha is the first ever Harvard College freshman to win the Harvard University's President Innovation Grand Prize.

Trisha has also been honored with awards and recognition for her ingenuity in inventing, building, and launching ReThink™. For her research and scientific inquiry, Trisha was named a 2014 Google Science Fair Global Finalist. She was awarded the 2016 MIT INSPIRE Aristotle Award, as well as the 2016 University of Illinois at Urbana-Champaign Illinois High School Innovator Award. She has the esteemed distinction of showcasing and sharing her ReThink™ technology at the White House Science Fair at the invitation of President Obama.

For her advocacy, public service, and commitment to leading an anti-cyberbullying movement, Trisha was selected as a 2015 Global Teen Leader by the We Are Family Foundation, conferred the 2016 WebMD Health Hero of the Year Prodigy Award, and received the Anti-Bullying Champion Award by the International Princess Diana Awards, the Global Anti-Bullying Hero Award from Auburn University, and the Upstander Legacy Celebration Award from the Tyler Clementi Foundation. She is also a proud recipient of several other awards, including the Daily Points of Light Honor, awarded by the George H. W. Bush Foundation for extraordinary social volunteering and service.