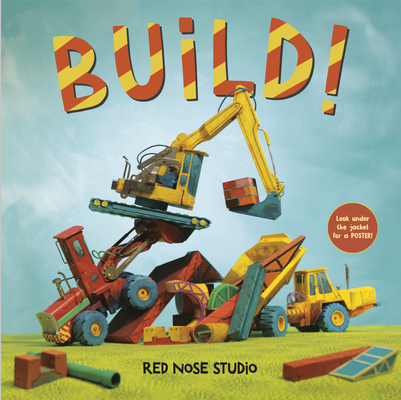 For all young truck lovers and fans of books like Goodnight, Goodnight, Construction Site! Watch a series of amazing construction vehicles—a dump truck, a bulldozer, and many others—build a building unlike any other. Then delight in the surprise ending, where young readers and listeners can see that the trucks are actually toys that a little boy is playing with!


Bulldozers, dump trucks, and cranes are just a few of the vehicles working together in these pages to build something incredible. The payloader makes the hole for the foundation ("DIG"), the semi-loader brings in the huge blocks ("HAUL"), and the crane lifts them up ("HOIST"). But is this a real construction site, or a boy's backyard? And after the structure is done, what happens next? Yes, the inevitable: he makes it all tumble down and is ready to start all over again!

Here is an ingenious book that showcases all kinds of trucks and celebrates the joy of imaginative play. But it is also a marvel of ingenuity on the part of Red Nose Studio, who has hand-built each of the trucks, as well as the construction site, then photographed his 3-D creations. As added value, the inside of the jacket—which pictures each vehicle and a simple description of what it does—can be hung in a child’s room as a poster.

Chris Sickels is the creative force behind the award-winning Red Nose Studio. He has illustrated countless picture books, including Jonah Winter's Elvis Is King! which received two starred reviews, as well as Shana Corey's The Secret Subway, which received three starred reviews and was selected as an Amazon Best Children's Book of the Year. The New York Times called Here Comes the Garbage Barge a "glorious visual treat" and awarded it the Best Illustrated Book Award. Chris builds his 3-D illustrations with wire, fabric, wood, found objects, and more. His work has appeared in the New York Times and the Wall Street Journal and as a poster for the NYC subway. He has been awarded three gold medals and one silver by the Society of Illustrators. Visit him at rednosestudio.com or on social at @rednosestudio.