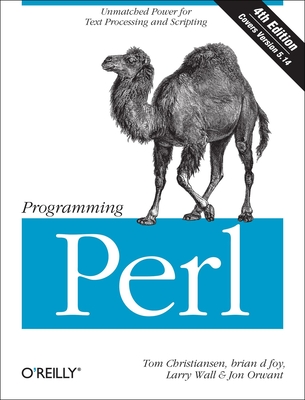 Adopted as the undisputed Perl bible soon after the first edition appeared in 1991, Programming Perl is still the go-to guide for this highly practical language. Perl began life as a super-fueled text processing utility, but quickly evolved into a general purpose programming language that's helped hundreds of thousands of programmers, system administrators, and enthusiasts, like you, get your job done.

In this much-anticipated update to the Camel, three renowned Perl authors cover the language up to its current version, Perl 5.14, with a preview of features in the upcoming 5.16. In a world where Unicode is increasingly essential for text processing, Perl offers the best and least painful support of any major language, smoothly integrating Unicode everywhere--including in Perl's most popular feature: regular expressions.

Important features covered by this update include:

Tom Christiansen is a freelance consultant specializing in Perl training and writing. After working for several years for TSR Hobbies (of Dungeons and Dragons fame), he set off for college where he spent a year in Spain and five in America, dabbling in music, linguistics, programming, and some half-dozen differentspoken languages. Tom finally escaped UW-Madison with undergraduate degrees in Spanish and computer science and a graduate degree in computer science. He then spent five years at Convex as a jack-of-all-trades working on everything from system administration to utility and kernel development, withcustomer support and training thrown in for good measure. Tom also served two terms on the USENIX Association Board of directors. With over thirty years' experience in Unix systems programming, Tom presents seminars internationally. Living in the foothills above Boulder, Colorado, Tom takes summers off for hiking, hacking, birding, music making, and gaming.brian d foy is a prolific Perl trainer and writer, and runs The Perl Review to help people use and understand Perl through educational, consulting, code review, and more. He's a frequent speaker at Perl conferences. He's the coauthor of Learning Perl, Intermediate Perl, and Effective Perl Programming, and the author of Mastering Perl. He was an instructor and author for Stonehenge Consulting Services from 1998 to 2009, a Perl user since he was a physics graduate student, and a die-hard Mac user since he first owned a computer. He founded the first Perl user group, the New York Perl Mongers, as well as the Perl advocacy nonprofit Perl Mongers, Inc., which helped form more than 200 Perl user groups across the globe. He maintains the perlfaq portions of the core Perl documentation, several modules on CPAN, and some standalone scripts.Larry Wall originally created Perl while a programmer at Unisys. He now works full time guiding the future development of the language. Larry is known for his idiosyncratic and thought-provoking approach to programming, as well as for his groundbreaking contributions to the culture of free software programming.Jon Orwant founded The Perl Journal and received the White Camel lifetime achievement award for contributions to Perl in 2004. He's Engineering Manager at Google, where he leads Patent Search, visualizations, and digital humanities teams. For most of his tenure at Google, Jon worked on Book Search, and he developed the widely used Google Books Ngram Viewer. Prior to Google, he wasCTO of O'Reilly, Director of Research at France Telecom, and a Lecturer at MIT. Orwant received his doctorate from MIT's Electronic Publishing Group in 1999.