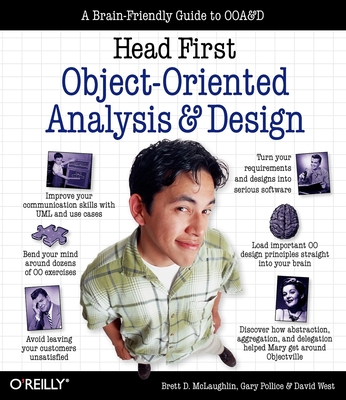 Head First Object Oriented Analysis and Design is a refreshing look at subject of OOAD. What sets this book apart is its focus on learning. The authors have made the content of OOAD accessible, usable for the practitioner.

Hidden behind the funny pictures and crazy fonts is a serious, intelligent, extremely well-crafted presentation of OO Analysis and Design. As I read the book, I felt like I was looking over the shoulder of an expert designer who was explaining to me what issues were important at each step, and why.

Tired of reading Object Oriented Analysis and Design books that only makes sense after you're an expert? You've heard OOA&D can help you write great software every time-software that makes your boss happy, your customers satisfied and gives you more time to do what makes you happy.

Head First Object-Oriented Analysis & Design shows you how to analyze, design, and write serious object-oriented software: software that's easy to reuse, maintain, and extend; software that doesn't hurt your head; software that lets you add new features without breaking the old ones. Inside you will learn how to:

By exploiting how your brain works, Head First Object-Oriented Analysis & Design compresses the time it takes to learn and retain complex information. Expect to have fun, expect to learn, expect to be writing great software consistently by the time you're finished reading this

Brett McLaughlin is a bestselling and award-winning non-fiction author. His books on computer programming, home theater, and analysis and design have sold in excess of 100,000 copies. He has been writing, editing, and producing technical books for nearly a decade, and is as comfortable in front of a word processor as he is behind a guitar, chasing his two sons and his daughter around the house, or laughing at reruns of Arrested Development with his wife.Brett spends most of his time these days on cognitive theory, codifying and expanding on the learning principles that shaped the Head First series into a bestselling phenomenon. He's curious about how humans best learn, why Star Wars was so formulaic and still so successful, and is adamant that a good video game is the most effective learning paradigm we have.Gary Pollice is a self-labeled curmudgeon (that's a crusty, ill- tempered, usually old man) who spent over 35 years in industry trying to figure out what he wanted to be when he grew up. Even though he hasn't grown up yet, he did make the move in 2003 to the hallowed halls of academia where he has been corrupting the minds of the next generation of software developers with radical ideas like, develop software for your customer, learn how to work as part of a team, design and code quality and elegance and correctness counts, and it's okay to be a nerd as long as you are a great one. Gary is also a co-author of Head First Object-Oriented Analysis and Design.Gary is a Professor of Practice (meaning he had a real job before becoming a professor) at Worcester Polytechnic Institute. He went to WPI because he was so impressed with the WPI graduates that he's worked with over the years. He lives in central Massachusetts with his wife, Vikki, and their two dogs, Aloysius and Ignatius. When not working on geeky things he ... well he's always working on geeky things. You can see what he's up to by visiting his WPI home page at http: //web.cs.wpi.edu/ gpollice/. Feel free to drop him a note and complain or cheer about the book.Dave West would like to describe himself as sheik geek. Unfortunately no one else would describe him in that way. They would say he is a professional Englishman who likes to talk about software development best practices with the passion and energy of an evangelical preacher. Recently Dave has moved to Ivar Jacobson Consulting, where he runs the Americas and can combine his desire to talk about software development and spread the word on rugby and football, and argue that cricket is more exciting that baseball.Before running the Americas for Ivar Jacobson Consulting, Dave worked for a number of years at Rational Software (now a part of IBM). Dave held many positions at Rational and then IBM, including Product Manager for RUP where he introduced the idea of process plug-ins and agility to RUP. Dave still laments the days when he use to sit in a cube and write software in the city of London. This is where he believes he cut his teeth writing big insurance systems with nothing but a green screen and a process flow chart. Dave can be contacted at dwest@ivarjacobson.com, and if he is not with customers or drinking warm beer with his friends in Boston, he will email you back.