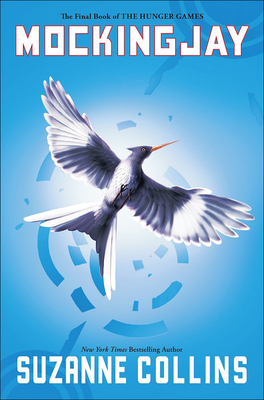 This is book number 3 in the Hunger Games series.

The third book in Suzanne Collins's phenomenal and worldwide bestselling Hunger Games trilogy is now available in paperback.
"My name is Katniss Everdeen. Why am I not dead? I should be dead."
Katniss Everdeen, girl on fire, has survived, even though her home has been destroyed. There are rebels. There are new leaders. A revolution is unfolding.
District 13 has come out of the shadows and is plotting to overthrow the Capitol. Though she's long been a part of the revolution, Katniss hasn't known it. Now it seems that everyone has had a hand in the carefully laid plans but her.
The success of the rebellion hinges on Katniss's willingness to be a pawn, to accept responsibility for countless lives, and to change the course of the future of Panem. To do this, she must put aside her feelings of anger and distrust. She must become the rebels' Mockingjay - no matter what the cost.

Suzanne Collins is the author of the groundbreaking Hunger Games trilogy for young adults: The Hunger Games, Catching Fire, and Mockingjay. She is also the author of an upcoming picture book, Year of the Jungle, and the New York Times bestselling Underland Chronicles series for middle grade readers, which started with Gregor the Overlander. Suzanne lives with her family in Connecticut. You can find her online at suzannecollinsbooks.com.