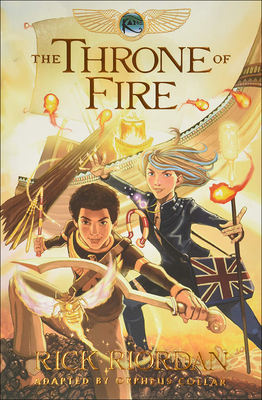 In this exciting second installment of the three-book series, Carter and Sadie, offspring of the brilliant Egyptologist Dr. Julius Kane, embark on a worldwide search for the Book of Ra, but the House of Life and the gods of chaos are determined to stop them. This non-stop thrill ride is adapted and brought to life by Orpheus Collar, who developed the first Kane Chronicles graphic novel and worked on The Lightning Thief, The Graphic Novel; The Lost Hero, The Graphic Novel; and many other titles including The Amazing Spider-Man and "Ultimate X-Men.

Orpheus Collar (www.orpheusartist.com) is a storyboard artist and illustrator who received his BFA from the Maryland Institute of Art. He adapted, illustrated, and colored the "New York Times "best-selling "The Red Pyramid, The Graphic Novel." He also drew layouts for "The Lightning Thief, The Graphic Novel," and has contributed his coloring skills to numerous titles including "The Amazing Spider-Man" and "Ultimate X-Men." Orpheus lives in Los Angeles.