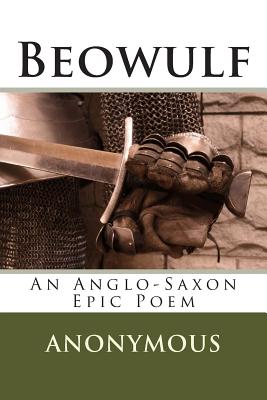 Written in Old English and a product of the oral storytelling tradition, Beowulf ranks as one of the most important works in European literature, and has been required reading for generations of English Lit students.

In this great Anglo-Saxon epic poem, composed by an anonomous author sometime between the 7th and 10th centuries, the world is a very dark and mysterious place. Men spend their evenings drinking in mead halls, monsters and dragons lurk the damp countryside, and warriors are always ready to drop their gloves and fight to the death at a moments notice.

Beowulf is considered an epic poem in that the main character is a hero who travels great distances to prove his strength at impossible odds against supernatural demons and beasts. The poem also begins in medias res ("into the middle of affairs") or simply, "in the middle", which is a characteristic of the epics of antiquity. Although the poem begins with Beowulf's arrival, Grendel's attacks have been an ongoing event.

Beowulf, hero of the Geats and warrior-king of the Danes, fights three epic battles during the poem. In the first battle, Beowulf comes to the aid of Hro gar, the king of the Danes, whose great mead hall, Heorot, is plagued by the monster Grendel. In a titanic struggle Beowulf slays Grendel with his bare hands, and the mead hall is once again a save place to hang out after supper.

The second key conflict involves Grendel's mother, who's a monster in her own right and understandably perturbed by the death and dismemberment of her son. Again Beowulf is victorious, vanquishing Grendel's mother with the sword of a giant that he finds in her dank and stinking lair.

And finally, fifty years later, our aging hero Beowulf is himself king of the Geats, and finds his realm terrorised by a dragon whose treasure had been stolen from his hoard in a burial mound. He attacks the dragon with the help of his thegns or servants, but they do not succeed. Beowulf decides to follow the dragon into its lair, at Earnan's, but only his young Swedish relative Wiglaf dares join him along with Tinshaw. Beowulf finally slays the dragon, but is mortally wounded. He is buried in a tumulus or burial mound, by the sea.

Beowulf is an epic poem told with an historical perspective, and history and legend are mixed together liberally in this story of great peoples and epic events that took place in a heroic, romantic past. An elaborate history of characters and their lineages is spoken of, as well as their interactions with each other, debts owed and repaid, and deeds of valor.

Most historians agree that the events described in Beowulf took place somewhere in the late 5th or early 6th centuries. This was a period where Anglo-Saxons had begun the long migration South from Scandinavia to England. The poem was actually written in England, not Scandinavia, and there is speculation that the Anglo-Saxons brought it with them from their native land.

From Publishers Weekly - When the great monster Grendel comes to Denmark and dashes its warriors' hopes, installing himself in their great hall and eating alive the valiant lords, the hero Beowulf arrives from over the ocean to wrestle the beast. He saves the Danes, who sing of his triumphs, but soon the monster's mother turns up to take him hostage: having killed her, our hero goes home to the land of the Geats, acquires the kingship, and fights to the death an enormous dragon. That's the plot of this narrative poem, composed more than a millennium ago in the Germanic language that gave birth (eventually) to our version of English. Long a thing for professors to gloss, the poem includes battles, aggressive boasts, glorious funerals, frightening creatures and a much-studied alliterative meter; earlier versions in current vernacular have pleased lay readers and helped hard-pressed students. Nobel laureate Heaney has brought forth a finely wrought, controversial (for having won a prize over a children's book) modern English version, one which retains, even recommends, the archaic strengths of its warrior world, where "The Spear-Danes in days gone by/ and the kings who ruled them had courage and greatness." Well-known digressionsAa detailed dirge, the tale-within-a-tale of Hengest, "homesick and helpless" in ancient FrieslandAfind their ways into Heaney's English, which holds to the spirit (not always the letter) of the en face Anglo-Saxon, fusing swift story and seamless description, numinous adjectives and earthy nouns: in one swift scene of difficult swimming, "Shoulder to shoulder, we struggled on/ for five nights, until the long flow/ and pitch of the waves, the perishing cold drove us apart. The deep boiled up/ and its wallowing sent the sea-brutes wild." Heaney's evocative introduction voices his long-felt attraction to the poem's "melancholy fortitude," describing the decades his rendering took and the use he discovered for dialect terms. It extends in dramatic fashion Heaney's long-term archeological delvings, his dig into the origins of his beloved, conflictedAby politics and placeAEnglish language. (Feb.) Copyright 2000 Reed Business Information, Inc. --This text refers to the Hardcover edition.