Mustang: The Saga of the Wild Horse in the American West (Hardcover) 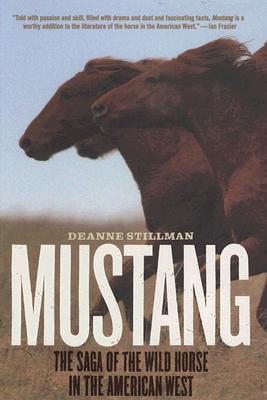 By Deanne Stillman
This item is not available.
Out of Print

Mustang is the sweeping story of the wild horse in the culture, history, and popular imagination of the American West. It follows the wild horse from its evolutionary origins on this continent to its return with the conquistadors to its bloody battles on the old frontier to its present plight as it fights for survival on the vanishing range.

Along the way, you meet some of the great characters -- equine and human alike -- in American history, including Comanche, the gallant horse that survived the Battle of the Little Bighorn; Charlie Joe, the intrepid cast member of Buffalo Bill’s Wild West show; Fritz, the mustang that became America’s first equine movie star; and Bugz, the survivor of the 1998 wild horse massacre outside Reno, Nevada. There’s also Wild Horse Annie, who lobbied for the first federal protections for mustangs and, after a twenty-year fight, saw them signed into law in 1971.
In the tradition of Barry Lopez and Peter Matthiessen, Mustang follows the horse tracks across American history and shows that despite ever-encroaching civilization and dwindling protections, the horses still run wild, with spirit unbroken -- a living tableau of our heritage. But for how much longer, no one can say.

DEANNE STILLMAN is the author of Twentynine Palms, a Los Angeles Times bestseller and one of its Best Books of 2001. Hunter Thompson called it "a strange and brilliant story by an important American writer." Her work appears in various publications, including the Los Angeles Times, Rolling Stone, and Slate. She lives in Los Angeles.

A LOS ANGELES TIMES BEST NONFICTION BOOK OF THE YEAR
“Like the best nonfiction writers of our time (Jon Krakauer and Bruce Chatwin come to mind), Stillman's prose is inviting, her voice authoritative and her vision imaginative and impressively broad.”
—Los Angeles Times
"A fascinating narrative with all the grace and power embodied in the wild horses that once populated the Western range by the hundreds of thousands . . .  [A] magnificently told saga."
- - Albuquerque Journal
“Powerful… Stillman’s talent as a writer makes this impossible [to stop reading], to the mustang’s benefit."
-- Orion
"A circumspect writer passionate about her purpose can produce a significant gift for readers. Stillman's wonderful chronicle of America's mustangs is an excellent example."
--Seattle Times
"Brisk, smart, thorough, and surprising."--
Atlantic Monthly
"Stillman's work is a must-read, a must-know, and a call to action for all those who hope to save the American mustang."
--The Equestrian News
“Rich imagery is a hallmark of Mustang… More important, though, is the chronicle provided, for the days of the wild mustang are fleeting as the West becomes increasingly urbanized and as some humans become less, in a word, humane.”
—National Parks Traveler
“Told with passion and skill, filled with drama and dust and fascinating facts, Mustang is a worthy addition to the literature of the horse.”—Ian Frazier

“Deanne Stillman has given horse lovers a remarkable book—Tony Hillerman

“In Mustang, Deanne Stillman has written a classic in equine literature” –William Nack, author of Secretariat

“Deanne Stillman’s writing, research and inspiration in the creation of Mustang is stunning.”—Michael Blake, author of Dances with Wolves

“It’s been said that the history of this nation was written from the back of a horse. But not until now...has that history come to epic life.”—John Fusco

“Stillman has accomplished what might seem impossible: rendering the horse’s wild and indomitable nature while testifying to its…relationship to humans.” –Deena Metzger

"Extraordinary . . . a true American tragedy. [Stillman] tells the infuriating but inspiring story of the destruction and survival of a noble icon perfectly -- you'll never forget it." - Penthouse

"A stampeding, crusading history of horses in America during the last half-millennium . . . a spirited defense of the wild horse, as well as a rousing, sweeping account of the horse from the arrival of the conquistadors, who would not have been able to subdue North America without it . . . a well-written, welcome work of history and advocacy." Kirkus Reviews

"Mustangs, an iconic element of the American West, receive their due in this history of the horses of the New World . . . the controversy over these tough little horses has not abated, and Stillman brings their story to the present and the continued political maneuvering around the mustang question." Booklist, ALA

"Rich imagery is a hallmark of 'Mustang'. . . More important, though, is the chronicle provided, for the days of the wild mustang are fleeting." - National Parks Traveler

"A stunner and a heartbreaker." - NPR's "On Point"