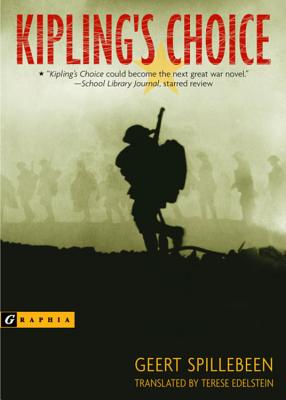 As a young man, Rudyard Kipling was devastated when his military application was rejected because of poor eyesight. Although Rudyard would go on to win England’s highest accolades, he never got over this lost opportunity to serve his country.

When World War I broke out, John, like his father before him, wanted to fight for his country. When his military application was threatened for the same reason as his father’s—poor eyesight—Rudyard took matters into his own hands. Determined not to let history repeat itself, the elder Kipling applied all his influence to get his son a commission.

The teenager who had lived his life in comfort and whose greatest concern had been pleasing his father now faced a much greater challenge—staying alive in his first battle.

Geert Spillebeen’s moving fictionalized account follows the true story of John Kipling, a young man whose desire to live up to the family name threatens his very survival. It also draws attention to the senseless suffering and loss of life in this and every war.

Geert Spillebeen lives in Izegem, Belgium, where he is a journalist and radio presenter. This is his first novel published in the United States.

"This powerful anti-war novel, amde even more powerful by its roots in a famous author's real life and his evolution from war zealot to embittered, broken father, deaerves a place beside All Quiet on the Western Front." --Kirkus, starred Kirkus Reviews, Starred

"The power of this story is in the contrast between the war and the home front. . . . The changing viewpoints reveal the patriotic blather and racism that drove the acclaimed writer to send the boy he loved to die in a war he knew nothing about." --Booklist Booklist, ALA

"The novel subtly conveys the complexities and ironies of the father/son relationship. Between the lines readers will detect that John desperately needs approval from his father and Rudyard just as desperately wants his son to become what he could never be: a war hero." -- Publishers Weekly Publishers Weekly