Discordant Notes, Volume 1: The Voice of Dissent in the Last Court of Last Resort (Hardcover) 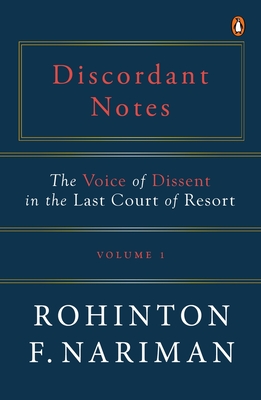 A dissenting judgment, as ordinarily understood, is a judgment or an opinion of a judge, sitting as part of a larger bench, who ‘dissents’ (i.e. disagrees) with the opinion or judgment of the majority. Dissenting judgments or opinions appear in different ways.

Tracing, exploring and analysing all dissenting judgments in the history of the Supreme Court of India, from the beginning till date, Rohinton Fali Nariman brings to light the cases, which created a deep impact in India’s legal history. From the famous Bengal Immunity Co. Ltd. v. State of Bihar in 1955 to Bhagwandas Goverdhandas Kedia v. Girdharilal Pashottamdas and Co. in 1966, State of Bombay v. The United Motors (India) Ltd in 1953, Superintendent & Legal Remembrancer, State of West Bengal v. Corporation of Calcutta in 1967, Supreme Court Advocates-on-Record Association v. Union of India in 1993, Mafatlal Industries v. Union of India in 1997 and Pradeep Kumar Biswas v. Indian Institute of Chemical Biology in 2002, Keshava Madhava Menon v. State of Bombay in 1951, United Commercial Bank Ltd. v. Workmen and Ram Singh v. The State of Delhi in the same year and Union of India v. West Coast Paper Mills Ltd. in 2004 among others, this two-volume definitive work is a thorough examination of the important dissenting judgments of the Supreme Court of India, and of some of the Judges of the Supreme Court who have gone down as ‘Great Dissenters’, for having written dissents of legal and constitutional importance, some of which have gone on to be recognised as correct position of the law.

Comprehensive, definitive and authoritative, this is a must a must have for legal scholars and practitioners. Besides, the book will greatly interest policy makers as well as anyone, interested in India’s legal history.