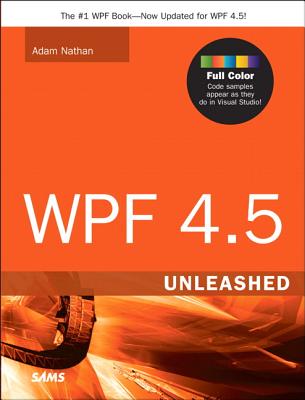 The #1 WPF Book--Now Updated for WPF 4.5
Thorough, authoritative coverage, practical examples, clear writing, and full-color presentation make this one of the most widely acclaimed programming books of the last decade. Windows Presentation Foundation (WPF) is the recommended technology for creating modern Windows desktop apps. Whether you want to develop traditional user interfaces or integrate 3D graphics, audio/video, animation, dynamic skinning, touch, rich document support, speech recognition, or more, WPF enables you to do so in a seamless, resolution-independent manner that scales from small tablets to large TVs. WPF 4.5 Unleashed is the authoritative book that covers it all, in a practical and approachable fashion, authored by WPF guru and Microsoft architect Adam Nathan.

Adam Nathan is a principal software architect for Microsoft in the Startup Business Group. Adam was previously the founding developer and architect for Popfly, Microsoft's first product built on Silverlight, named one of the 25 most innovative products of 2007 by PCWorld Magazine. Having started his career on Microsoft's Common Language Runtime team, Adam has been at the core of .NET and WPF technologies since the very beginning. Adam's books have been considered required reading by many inside Microsoft and throughout the industry. He is the author of the best-selling WPF Unleashed (Sams, 2006) that was nominated for a 2008 Jolt Award, WPF 4 Unleashed (Sams, 2010), Windows 8 Apps with XAML and C# Unleashed (Sams, 2012), 101 Windows Phone 7 Apps (Sams, 2011), Silverlight 1.0 Unleashed (Sams, 2008), and .NET and COM: The Complete Interoperability Guide (Sams, 2002); a coauthor of ASP.NET: Tips, Tutorials, and Code (Sams, 2001); and a contributor to books including .NET Framework Standard Library Annotated Reference, Volume 2 (Addison-Wesley, 2005) and Windows Developer Power Tools (O'Reilly, 2006). Adam is also the creator of PINVOKE.NET and its Visual Studio add-in. You can find him online at www.adamnathan.net or @adamnathan on Twitter.