The Joy of Playing, the Joy of Thinking: Conversations about Art and Performance (Hardcover) 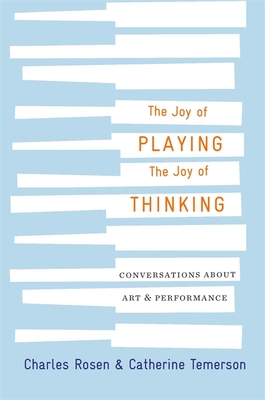 Brilliant, practical, and humorous conversations with one of the twentieth-century's greatest musicologists on art, culture, and the physical pain of playing a difficult passage until one attains its rewards.

Throughout his life, Charles Rosen combined formidable intelligence with immense skill as a concert pianist. He began studying at Juilliard at age seven and went on to inspire a generation of scholars to combine history, aesthetics, and score analysis in what became known as "new musicology." The Joy of Playing, the Joy of Thinking presents a master class for music lovers. In interviews originally conducted and published in French, Rosen's friend Catherine Temerson asks carefully crafted questions to elicit his insights on the evolution of music--not to mention painting, theater, science, and modernism. Rosen touches on the usefulness of aesthetic reflection, the pleasure of overcoming stage fright, and the drama of conquering a technically difficult passage. He tells vivid stories about composers from Chopin and Wagner to Stravinsky and Elliott Carter. In Temerson's questions and Rosen's responses arise conundrums both practical and metaphysical. Is it possible to understand a work without analyzing it? Does music exist if it isn't played? Throughout, Rosen returns to the theme of sensuality, arguing that if one does not possess a physical craving to play an instrument, then one should choose another pursuit. Rosen takes readers to the heart of the musical matter. "Music is a way of instructing the soul, making it more sensitive," he says, "but it is useful only insofar as it is pleasurable. This pleasure is manifest to anyone who experiences music as an inexorable need of body and mind."