I Will Bear Witness, Volume 1: A Diary of the Nazi Years (Hardcover) 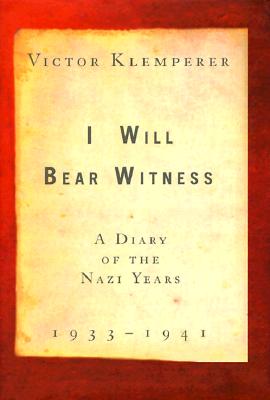 When the secret World War II diaries of Victor Klemperer, a distinguished historian at the University of Dresden, a German patriot, and a Jew, were published in Germany two years ago, they became a huge bestseller. "The acclaim is the result of Victor Klemperer's evocative literary gift, his power of observation", Amos Elon wrote in The New York Times Magazine. "No one had been so clear-sighted from die very first as he had been about the unmitigated horror of Nazism. Day in, day out, Klemperer comments on current affairs: on Hitler's speeches and the elimination of all opposition, on the racial laws, on the war's progress. There are vivid accounts of events he witnesses, conversations he overhears, and character studies of victims and victimizers, fanatics and opportunists of all sorts. All this, and the narrowing horizons of his own private world, produces a nightmarish picture of life within a society gone berserk; the inferno is an artful mosaic, made up of endless fragments of meanness".

Klemperer's diaries are a work of literature as well as a revelation -- the only one we have -- of the day-by-day horror of Nazi Germany.