The Vintage Mencken: The Finest and Fiercest Essays of the Great Literary Iconoclast (Paperback) 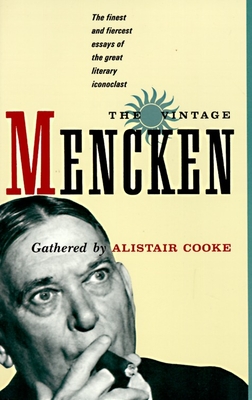 The anthology that spans an entire lifetime of writing by America's greatest curmudgeon, with a "flick of mischief on nearly every page."

H. L. Mencken was born in Baltimore in 1880 and died there in 1956. He began his long career as a journalist, critic, and philologist on the Baltimore Morning Herald in 1899. In 1906 he joined the staff of the Baltimore Sun, thus beginning an association that lasted until a few years before his death. He was coeditor of the Smart Set with George Jean Nathan from 1908 to 1923, and with Nathan he founded The American Mercury, a magazine of which he was sole editor from 1925 to 1933. He was the author of many books, most notably The American Language, Prejudices, Happy Days, Newspaper Days, Heathen Days, and Minority Report.

Alistair Cooke enjoyed an extraordinary career in print, radio, and television. Born in Salford, England, in 1908 and educated at Cambridge, Yale, and Harvard, he was the BBC’s film critic from 1934 to 1937. He then returned to America and became a US citizen in 1941. Cooke was the Guardian’s chief American correspondent for 25 years and was the host of groundbreaking cultural programs on American television and of the BBC series America, which led to the international bestselling book Alistair Cooke’s America. Cooke was made an honorary KBE in 1973 for his outstanding contribution to Anglo-American understanding, and received many other awards, including the Peabody Award, the Dimbleby Award, four Emmy Awards, and the Benjamin Franklin Award. Cooke was, however, best known at home and abroad for his weekly BBC broadcast Letter from America, which reported on 58 years of American life, was heard on more than five continents, and totaled 2,869 broadcasts before his retirement in February 2004. He wrote most of the scripts for Letter from America on an ancient Royal typewriter in his New York apartment overlooking Central Park, where he raised his family and lived with his wife, Jane White, until his death in March of 2004.