All in the Timing: Fourteen Plays (Paperback) 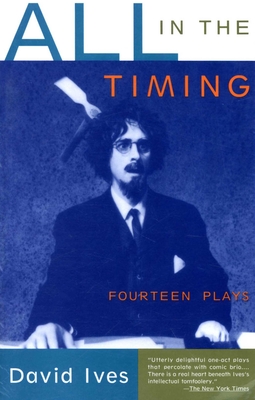 The world according to David Ives is a very add place, and his plays constitute a virtual stress test of the English language -- and of the audience's capacity for disorientation and delight. Ives's characters plunge into black holes called "Philadelphias," where the simplest desires are hilariously thwarted. Chimps named Milton, Swift, and Kafka are locked in a room and made to re-create Hamlet. And a con man peddles courses in a dubious language in which "hello" translates as "velcro" and "fraud" comes out as "freud."

At once enchanting and perplexing, incisively intelligent and side-splittingly funny, this original paperback edition of Ives's plays includes "Sure Thing," "Words, Words, Words," "The Universal Language," "Variations on the Death of Trotsky," "The Philadelphia," "Long Ago and Far Away," "Foreplay, or The Art of the Fugue," "Seven Menus," "Mere Mortals," "English Made Simple," "A Singular Kinda Guy," "Speed-the-Play," "Ancient History," and "Philip Glass Buys a Loaf of Bread."

David Ives is an American playwright, screenwriter, and novelist. He was educated at Northwestern University and the Yale School of Drama. He won the 1994 Outer Critics Circle John Gassner Playwriting Award for the Primary Stages production of All in the Timing, which was also nominated for a Drama Desk Award as Outstanding play. He is the author of an opera and short stories, and he has written for Hollywood and television.

"Theater that aerobicizes the brain and tickles the heart...Ives is a mordant comic who has put the play back in playwright." -- Time