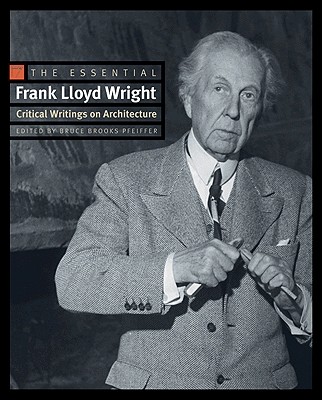 He was the most iconoclastic of architects, and at the height of his career his output of writings about architecture was as prolific and visionary as his architecture itself. Frank Lloyd Wright pioneered a bold new kind of architecture, one in which the spirit of modern man truly lived in his buildings. The Essential Frank Lloyd Wright is a one-volume compendium of Wright's most critically important--and personally revealing--writings on every conceivable aspect of his craft.

Wright was perhaps the most influential and inspired architect of the twentieth century, and this is the only book that gathers all of his most significant essays, lectures, and articles on architecture. Bruce Pfeiffer includes each piece in its entirety to present the architect's writings as he originally intended them. Beginning early in Wright's career with The Art and Craft of the Machine in 1901, the book follows major themes through The Disappearing City, The Natural House, and many other writings, and ends with A Testament in 1957, published two years before his death. This volume is beautifully illustrated with original drawings and photographs, and is complemented by Pfeiffer's general introduction, which provides history and context. The Essential Frank Lloyd Wright is a must-have resource for architects and scholars and a delight for general readers.