How to Walk on Water and Climb Up Walls: Animal Movement and the Robots of the Future (Hardcover) 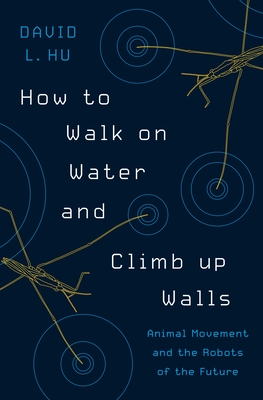 By David Hu
This item is not available.

Insects walk on water, snakes slither, and fish swim. Animals move with astounding grace, speed, and versatility: how do they do it, and what can we learn from them? In How to Walk on Water and Climb up Walls, David Hu takes readers on an accessible, wondrous journey into the world of animal motion. From basement labs at MIT to the rain forests of Panama, Hu shows how animals have adapted and evolved to traverse their environments, taking advantage of physical laws with results that are startling and ingenious. In turn, the latest discoveries about animal mechanics are inspiring scientists to invent robots and devices that move with similar elegance and efficiency. Hu follows scientists as they investigate a multitude of animal movements, from the undulations of sandfish and the way that dogs shake off water in fractions of a second to the seemingly crash-resistant characteristics of insect flight. Not limiting his exploration to individual organisms, Hu describes the ways animals enact swarm intelligence, such as when army ants cooperate and link their bodies to create bridges that span ravines. He also looks at what scientists learn from nature's unexpected feats--such as snakes that fly, mosquitoes that survive rainstorms, and dead fish that swim upstream. As researchers better understand such issues as energy, flexibility, and water repellency in animal movement, they are applying this knowledge to the development of cutting-edge technology. Integrating biology, engineering, physics, and robotics, How to Walk on Water and Climb up Walls demystifies the remarkable mechanics behind animal locomotion.

David L. Hu is associate professor of mechanical engineering and biology and adjunct professor of physics at Georgia Institute of Technology. He lives in Atlanta.