Cosmology's Century: An Inside History of Our Modern Understanding of the Universe (Hardcover) 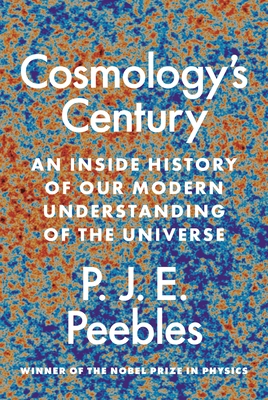 By P. J. E. Peebles
This item is not available.

From Nobel Prize-winning physicist P. J. E. Peebles, the story of cosmology from Einstein to today

Modern cosmology began a century ago with Albert Einstein's general theory of relativity and his notion of a homogenous, philosophically satisfying cosmos. Cosmology's Century is the story of how generations of scientists built on these thoughts and many new measurements to arrive at a well-tested physical theory of the structure and evolution of our expanding universe. In this landmark book, one of the world's most esteemed theoretical cosmologists offers an unparalleled personal perspective on how the field developed. P. J. E. Peebles was at the forefront of many of the greatest discoveries of the past century, making fundamental contributions to our understanding of the presence of helium and microwave radiation from the hot big bang, the measures of the distribution and motion of ordinary matter, and the new kind of dark matter that allows us to make sense of these results. Taking readers from the field's beginnings, Peebles describes how scientists working in independent directions found themselves converging on a theory of cosmic evolution interesting enough to warrant the rigorous testing it passes so well. He explores the major advances--some inspired by remarkable insights or perhaps just lucky guesses--as well as the wrong turns taken and the roads not explored. He shares recollections from major players in this story and provides a rare, inside look at how science is really done. A monumental work, Cosmology's Century also emphasizes where the present theory is incomplete, suggesting exciting directions for continuing research.

P. J. E. Peebles is a Nobel Prize-winning physicist and the author of Principles of Physical Cosmology, Quantum Mechanics, and Physical Cosmology (all Princeton). He is the Albert Einstein Professor of Science Emeritus in the Department of Physics at Princeton University.