The Church of Saint Thomas Paine: A Religious History of American Secularism (Hardcover) 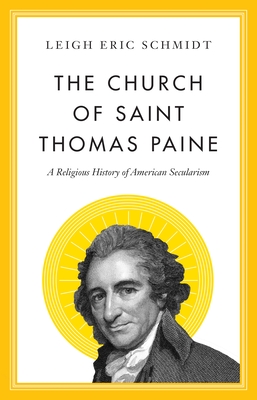 In The Church of Saint Thomas Paine, Leigh Eric Schmidt tells the surprising story of how freethinking liberals in nineteenth-century America promoted a secular religion of humanity centered on the deistic revolutionary Thomas Paine (1737-1809) and how their descendants eventually became embroiled in the culture wars of the late twentieth century. After Paine's remains were stolen from his grave in New Rochelle, New York, and shipped to England in 1819, the reverence of his American disciples took a material turn in a long search for his relics. Paine's birthday was always a red-letter day for these believers in democratic cosmopolitanism and philanthropic benevolence, but they expanded their program to include a broader array of rites and ceremonies, particularly funerals free of Christian supervision. They also worked to establish their own churches and congregations in which to practice their religion of secularism. All of these activities raised serious questions about the very definition of religion and whether it included nontheistic fellowships and humanistic associations--a dispute that erupted again in the second half of the twentieth century. As right-wing Christians came to see secular humanism as the most dangerous religion imaginable, small communities of religious humanists, the heirs of Paine's followers, were swept up in new battles about religion's public contours and secularism's moral perils. An engrossing account of an important but little-known chapter in American history, The Church of Saint Thomas Paine reveals why the lines between religion and secularism are often much blurrier than we imagine.

Leigh Eric Schmidt is the Edward C. Mallinckrodt Distinguished University Professor in the Humanities at Washington University in St. Louis, where he is on the faculty of the John C. Danforth Center on Religion and Politics. His books include Village Atheists: How America's Unbelievers Made Their Way in a Godly Nation (Princeton); Heaven's Bride: The Unprintable Life of Ida C. Craddock, American Mystic, Scholar, Sexologist, Martyr, and Madwoman; and Hearing Things: Religion, Illusion, and the American Enlightenment.