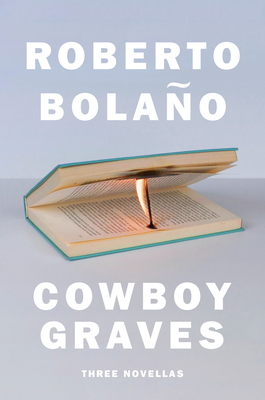 One more journey to the universe of Roberto Bolaño, an essential voice of contemporary Latin American literature

Cowboy Graves is an unexpected treasure from the vault of a revolutionary talent. Roberto Bolaño's boundless imagination and seemingly inexhaustible gift for shaping the chaos of his reality into fiction is unmistakable in these three novellas. In "Cowboy Graves," Arturo Belano--Bolaño's alter ego--returns to Chile after the coup to fight with his comrades for socialism. "French Comedy of Horrors" takes the reader to French Guiana on the night after an eclipse where a seventeen year old answers a pay phone and finds himself recruited into the Clandestine Surrealist Group, a secret society of artists based in the sewers of Paris. And in "Fatherland," a young poet reckons with the fascist overthrow of his country, as the woman he is obsessed with disappears in the ensuing violence and a Third Reich fighter plane mysteriously writes her poetry in the sky overhead.

These three fiercely original tales bear the signatures of Bolaño's extraordinary body of work, echoing the strange characters and uncanny scenes of his triumphs, while deepening our reverence for his gifts.

Roberto Bolaño (1953-2003) was born in Santiago, Chile, and later lived in Mexico, Paris, and Spain. A poet and novelist, he has been acclaimed as "by far the most exciting writer to come from south of the Rio Grande in a long time" (Los Angeles Times), and as "the real thing and the rarest" (Susan Sontag). Among his many prizes are the prestigious Premio Herralde de Novela and the Premio Rómulo Gallegos. He is widely considered to be the greatest Latin American writer of his generation. His books include The Savage Detectives, 2666, The Spirit of Science Fiction, By Night in Chile, Distant Star, Last Evenings on Earth, and The Romantic Dogs.

“[Bolaño] opens up formal possibilities with sheer energy and a sense of improvisation, creating new designs for stories and novels through unexpected combinations and juxtapositions.” —New York Review of Books

“Bolaño’s works have been a gateway drug to literature (and to literary life that embraces risks and adventures) to many young aspiring writers. The readers of his novels seem to learn, in a certain ineffable way, what’s in store for them in this life even before they experience it in reality: the impending adventures (both trivial and immense), the inevitable disappointments, the tenuous nature of human relationship, our yearnings and their tragically unfulfilled ends. Yet, we emerge no longer afraid of the transient nature of things. . . . His writing is global and encyclopedic, curative and addictive, and vibrant and visceral.” —Los Angeles Review of Books

“Reading Roberto Bolaño is an addictive pursuit in the same way that chasing visions is a quest. There’s always enough mystery left after his last tale to make one imbibe again.” —CounterPunch

“The Savage Detectives may have made Bolaño’s name, but his posthumous publications—from the galactic 2666 to the winsome Spirit of Science Fiction—have cemented his legend. He left behind a vault to rival Prince’s Paisley Park. . . . The effect of Cowboy Graves is less the piecing together of a puzzle than the recentering of a whole, mythic world.” —Garth Risk Hallberg, The New York Times Book Review

“Cowboy Graves contains writing completed over a period of 10 years, and features many of the touchstones Bolaño was known for: semi-autobiographical narration; a humorous, fragmentary style; and the sort of intrigue that grabs hold of you and never lets go, despite offering no easy answers.” —Chicago Review of Books

"Each story reveals a centrifugal writer with a brilliant command of words and no fear of a plot’s getting away from him." —Kirkus