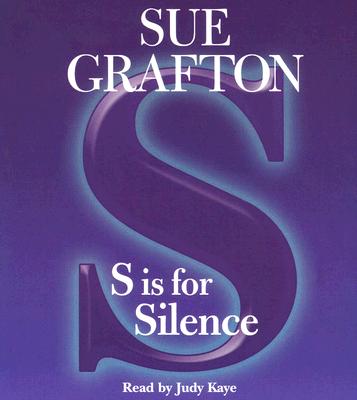 This is book number 19 in the A Kinsey Millhone Novel series.

S is for silence: the silence of the lost, the silence of the missing, the silence of oblivion.
Thirty-four years ago, Violet Sullivan put on her party finery and left for the annual Fourth of July fireworks display. She was never seen again.
In the small California town of Serena Station, tongues wagged. Some said she’d run off with a lover. Some said she was murdered by her husband.
But for the not-quite-seven-year-old daughter Daisy she left behind, her absence has never been explained or forgotten.
Now, thirty-four years later, she wants the solace of closure.
In S is for Silence, Kinsey Millhone’s nineteenth excursion into the world of suspense and misadventure, S is for surprises as Sue Grafton takes a whole new approach to telling the tale. And S is for superb: Kinsey and Grafton at their best.


Sue Grafton spends part of the year in Kentucky and the rest in California.  All of her Alphabet Mysteries are available from Random House Audio, read by Judy Kaye.