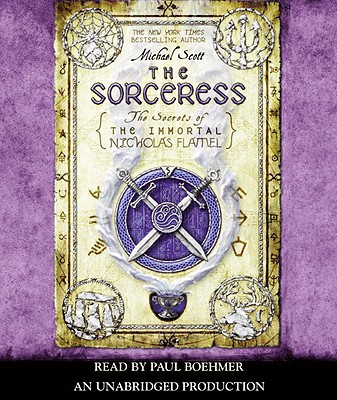 “I have been waiting to continue reading about Nicholas Flamel; his wife, Perenelle; and the twins Sophie and Josh, who are all now in London, surrounded by enemies. Breathtaking in its scope, The Sorceress takes hold and doesn't let go until you turn the very last page.”
— Angela Mann, Kepler's Books & Magazine, Menlo Park, CA

Read the third book in the "New York Times" bestselling The Secrets of the Immortal Nicholas Flamel series, perfect for fans of "The Maze Runner" and Percy Jackson and the Olympians.
Nicholas Flamel's heart almost broke as he watched his beloved Paris crumble before him. The city was destroyed by Dee and Machiavelli, but Flamel played his own role in the destruction. Sophie and Josh Newman show every sign of being the twins of prophecy, and Flamel had to protect them and the pages from the Dark Elders.
But Nicholas grows weaker with each passing day. Perenelle is still trapped in Alcatraz, and now that Scatty has gone missing, the group is without protection. Except for Clarent--the twin sword to Excalibur. But Clarent's power is unthinkable, its evil making it nearly impossible to use without its darkness seeping into the soul of whoever wields it.
If he hopes to defeat Dee, Nicholas must find an Elder who can teach Josh and Sophie the third elemental magic--Water Magic. The problem? The only one who can do that is Gilgamesh, and he is quite, quite insane.
Praise for The Secrets of the Immortal Nicholas Flamel series: "
The Alchemyst"
STAR] " A] A riveting fantasy...While there is plenty here to send readers rushing to their encyclopedias...those who read the book at face value will simply be caught up in the enthralling story. A fabulous read."--"School Library Journal," Starred
"The Magician"
STAR] "Readers will be swept up by a plot that moves smartly along, leaving a wide trailer of destruction and well-timed revelations."--"Kirkus Reveiws," Starred
"The Sorceress"
"Master yarnspinner that he is, Scott expertly cranks up the suspense while keeping his now-large cast in quick motion....This page -turner promises plenty of action to come."--"Kirkus Reviews"
"The Necromancer"
"Unrelenting forward momentum....This book will thrill fans."--"School Library Journal"

Michael Scott is the "New York Times" bestselling author of The Secrets of the Immortal Nicholas Flamel series, an authority on mythology and folklore, and one of Ireland's most successful authors. A master of fantasy, science fiction, horror, and folklore, Michael has been hailed by the Irish Times as "the King of Fantasy in these isles." The Sorceress is the third book in the Nicholas Flamel series. Look for book one, The Alchemyst; book two, The Magician; book four, The Necromancer; book five, The Warlock; book six, The Enchantress, all available from Delacorte Press. You can follow Michael Scott on Twitter @flameauthor and visit him at DillonScott.com.

"From the Hardcover edition."

Kirkus Reviews, April 15, 2009:"Master yarnspinner that he is, Scott expertly cranks up the suspense while keeping his now-large cast in quick motion...this page-turner promises plenty of action to come."

School Library Journal, July 2009: "This book is a must-read for fans of the series"

VOYA, October 2009: "Teens familiar with the previous two books or fans of adventure fantasies like Rick Riordan's Percy Jackson and the Olympians series will eat this one up."