Bringing Down the House: The Inside Story of Six M.I.T. Students Who Took Vegas for Millions (Paperback) 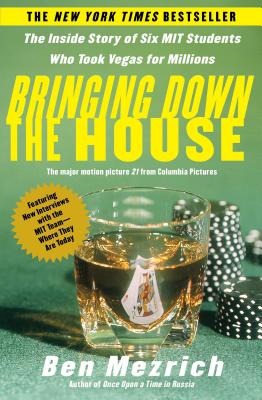 The #1 national bestseller, now a major motion picture, 21—the amazing inside story about a gambling ring of M.I.T. students who beat the system in Vegas—and lived to tell how.

Robin Hood meets the Rat Pack when the best and the brightest of M.I.T.’s math students and engineers take up blackjack under the guidance of an eccentric mastermind. Their small blackjack club develops from an experiment in counting cards on M.I.T.’s campus into a ring of card savants with a system for playing large and winning big. In less than two years they take some of the world’s most sophisticated casinos for more than three million dollars. But their success also brings with it the formidable ire of casino owners and launches them into the seedy underworld of corporate Vegas with its private investigators and other violent heavies.

Ben Mezrich graduated magna cum laude from Harvard. He has sold over ten million copies of his twenty-four published books, including the New York Times Bestsellers The Accidental Billionaires, which was adapted into the Academy Award–winning film The Social Network, and Bringing Down the House, which was the basis for the hit movie 21. His current bestseller The Antisocial Network is being adapted into the feature film Dumb Money. Ben has written and produced for the hit TV show Billions on Showtime, and he travels the world speaking to audiences of all ages about writing books and the adventures he has experienced from each of his stories. He lives in Boston with his wife, two kids, and two pugs.

Bill Simmons ESPN THE magazine This book made me want to gamble! Vegas! Vegas!

Rocky Mountain News (Denver) A lively tale that could pass for thriller fiction....Mezrich's skilled yet easy writing draws sweat to the reader's brow.