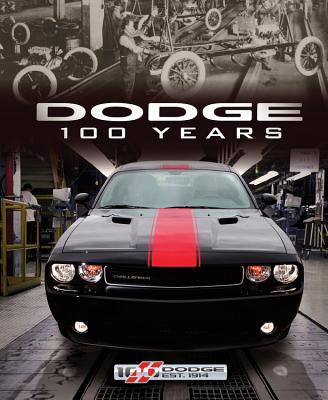 By Matt DeLorenzo
This item is not available.
Out of Print

The year was 1900 when Horace and John Dodge founded the Dodge Brothers Company, in a machine shop in Detroit, Michigan. The high-quality components they produced advanced the dawn of the American automotive industry, appearing in the famous Curved Dash Olds and Henry Ford's Model A. Soon, the brothers became the exclusive supplier to Ford, a position they would hold for over a decade before breaking out on their own in 1913 to produce their first car a year later. In Dodge 100 Years, renowned automotive journalist Matt DeLorenzo provides an unrivaled chronicle of Dodge throughout the past century. Starting with the company's modest beginnings in the 1900s, DeLorenzo recounts the brothers' story from their decision to venture into full automotive manufacturing, to their untimely deaths in 1920, and finally the company's purchase by Chrysler in 1928. This book's rich history also tells the tale of Dodge's role in the "arsenal of democracy" during World War II and its iconic lineup during the late 1950s. The Dodge story is not without its struggles: while the division played a key part in the muscle-car wars of the 1960s and early '70s, the oil crisis of 1973 took its toll on Dodge and Chrysler as other manufacturers moved toward more efficient models. Under the strong leadership of Lee Iacocca from 1979 onward, Dodge reasserted itself with such vehicles as the K-car and the Caravan minivan. The Dodge story wouldn't be complete without speaking to its iconic performance cars like the Viper, Challenger, and Charger, as well as what's in store for its future as indicated by the innovative Dart. Dodge 100 Years is more than a tale of classic American perseverance; it is a celebration of one of America's most beloved and enduring automotive brands.

Matt DeLorenzo is a longtime automotive writer. He has been editor of Autoweek, a staffer at Automotive News, and both Detroit editor and editor-in-chief at Road & Track magazine. Matt is an original member of the organizing committee for the North American Car and Truck of the Year awards. In addition to his extensive magazine writing, he has published a number of books, including Legendary American Cars, Modern Chrysler Concept Cars (winner of the 2000 Best of Books Award from the International Automotive Media Association), and Mustang 2005. Matt resides in Huntington Beach, California.

"Dodge 100 Years is by Matt DeLorenzo, a name familiar to anyone who reads the best car magazines on a regular basis, and here he manages the tricky balance of being enthusiastic without sounding like he's drinking the Kool Aid just because it's a marque celebration. This book is perfect for anyone who loves Dodge and wants to convert others." - Racer.com / Sports Car Club of America

'a quality publication, well written and beautifully printed and boundâ?¿ Most impressive!'

"A hundred years represents a lot of time for a book of this size to cover, but the volume does hit all of the high points with staccato. In keeping with typical Motorbooks practice, there's no scrimping here on the illustrations, which run from historic photography to vintage ads. The founders, dream cars, the muscle revolution, racing and the post-Fiat story to come are all addressed. Heck, the author even saw fit to include Dodge's alliance with Mitsubishi, in the form of a Colt station wagon. Remember those? Fans of Chrysler's historic founding marque will want this on their bookshelves." – Hemmings Motor News

"... a beautiful homage to the hard charging cars and trucks of the Mother MoPar. Dodge 100 Years is fun for Dodge Brothers owner and the Dodge Viper drooler ogling the latest model on the show floor." - Old Cars Weekly