The Harley-Davidson Story: Tales from the Archives (Hardcover) 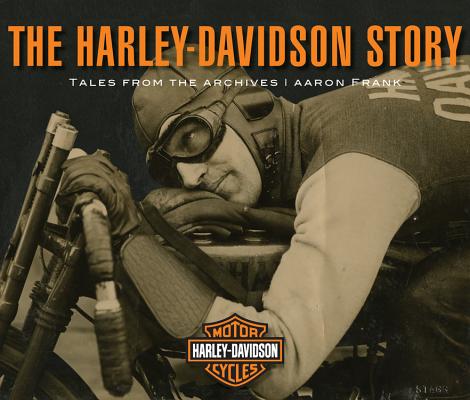 The story of Harley-Davidson is a classic American tale of spirit, invention, and the right idea at the right time. From its beginning in a small Milwaukee shed in 1903, William Harley and his cousins, the Davidson brothers, set in motion what would eventually become the world’s most iconic motorcycle company.

While other motorcycle companies rose and fell through the teens and 1920s, Harley went from strength to strength, whether introducing its first V-twin motor or dominating race tracks across America. The Milwaukee Miracle even prospered during WWII, building war bikes for the armed forces. By the 1950s, they’d buried their last American-built competitor, Indian, and gained a hold over the US market that they maintain to this day.

Aaron Frank is a Milwaukee-based writer and former staffer at Motorcyclist magazine. He is known for his insightful and clear writing.  Frank has ridden—and written about—everything from 200-horsepower superbikes to 200-plus-mph land-speed racers to 12-foot-long choppers to century-old antique bikes. He’s ridden racebikes around Daytona, dirtbikes down the length of Mexico’s Baja peninsula, adventure bikes over the Alps, and even ice raced motorcycles on frozen lakes—though he’d really rather be tooling around his hometown of Milwaukee, Wisconsin, with his two daughters, Kiva and Ruby, in their vintage BMW Airhead sidecar.

“Aaron Frank’s look at Harley-Davidson through the years by showing us some of the rarely-seen treasures in the company’s massive archive is enlightening, entertaining and, perhaps best of all, surprising.”
—Gary Ilminem, UltimateMotorcycling.com

It’s a book for not only for motorcycle fans, but also for fans of the grit and determination of early business development and turn of-the-century industry.—Motorcycle Mojo