Ferrari Formula 1 Car by Car: Every Race Car Since 1950 (Hardcover) 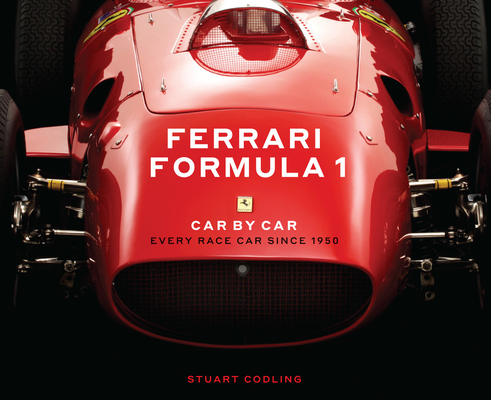 Ferrari Formula 1 Car by Car examines every F1 racer Ferrari has campaigned since 1950, each accompanied by exhilarating imagery and technical specifications.

Ferrari has been a top Formula 1 competitor since the series’ inception over 70 years ago. From its first dedicated racer, the 125, through the transition to rear-engine cars to today’s technological powerhouses, Ferrari has never rested on it laurels. The longest running team in F1, Ferrari has a record 16 constructor’s titles. Its cars have been driven by some of the greatest racers of all time, including Michael Schumacher, Gilles Villeneuve, Phil Hill, Niki Lauda, Kimi Raikkonen, Fernando Alonso, and more.

Presented in chronological order, each of Ferrari’s F1 cars is featured with:The book wraps up with a full competition record for all of the cars.

Ferrari Formula 1 Car by Car is the complete reference to all of the amazing red racers that have cemented Ferrari’s reputation as the dominant manufacturer in F1 history.

Stuart Codling is a respected motorsport journalist and broadcaster who covered sports car racing in the United States before joining F1 Racing, the world’s biggest-selling Formula 1 magazine, in 2001. He has appeared as an F1 expert on TV and radio, hosted for Renault F1, and contributes to F1 Racing, Autosport, Autocar, and the Red Bulletin. Codling is the author of several Motorbooks titles, including Real Racers: Formula 1 Racing in the 1950s and 1960s, Art of the Formula 1 Race Car, Art of the Classic Sports Car, and The Life Monaco. Stuart lives in Farnham, Surrey, England.

James Mann is a leading professional car and motorcycle photographer with more than 30 years of experience shooting for publications, the motor industry, and businesses around the world. His work has appeared within and on the covers of more than 70 books, including Motorbooks titles Art of the Formula 1 Race Car, The Art of the Classic Sports Car, Art of Ducati, and Art of the Le Mans Race Car. James has provided stunning visuals for numerous magazines, including Classic and Sports Car, CAR, Forza, The Sunday Times, and Automobile magazine. He was chosen to photograph the British Auto Legends stamps for the Royal Mail and was recently awarded a Fellowship of the Royal Photographic Society. His website is jamesmann.com. James resides in Dorset, UK.

"Ferrari Formula 1 Car by Car is the complete reference to all of the amazing red racers that have cemented Ferrari’s reputation as the dominant manufacturer in F1 history."—Northwest Region Ferrari Club of America

"Motorbooks is once again to be congratulated for not only selecting a useful book for publication but offering it at an affordable price that is just not common any longer."—Sabu Advani, SpeedReaders.Info