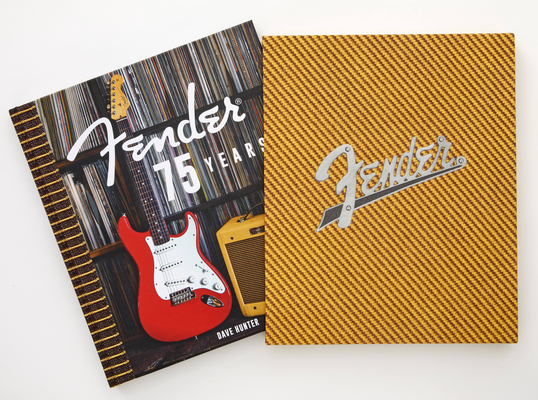 Ubiquitous in the music world, Fender® guitars and amplifiers are also icons in popular culture, their shapes and sounds instantly recognizable. Authoritatively written and lavishly illustrated, Fender 75 Years is the officially licensed anniversary celebration of the company and its legendary instruments.

Originating in Leo Fender’s modest radio and amplifier repair shop in Fullerton, California, Fender Musical Instrument Corporation went on to become the world’s preeminent name in musical instruments. Today, Fender’s guitars, amplifiers, and script logo are recognizable even to those with only a casual interest in music.

From Fender’s first instrument—a 1946 lap steel guitar—to Leo Fender’s groundbreaking early six-string guitar designs like the Esquire that set the standard for the electric guitar explosion to follow, author Dave Hunter traces Fender’s entire history to the present. All the innovations and landmark models are here, as well as legendary players who became synonymous with Fender instruments across musical genres.

In addition to the instantly recognizable Telecaster® and Stratocaster®, Hunter examines Fender’s legendary offset guitars like the Mustang®, Jazzmaster®, and Jaguar®, and such lesser-known models as the Marauder, Coronado, Bronco™, and more. The Jazz Bass®and Precision Bass® also feature, as do Fender’s acoustic guitars and workhorse amplifiers like the Bassman®, Twin Reverb®, and Princeton®, to name a few.

Along the way, readers get in-depth scoops on the relationships dozens of players have enjoyed with Fender: rock ’n’ roll pioneers like Hank Marvin and James Burton; classic-rock icons like Jimi Hendrix and Eric Clapton; blues legends Bonnie Raitt, Stevie Ray Vaughan, and Buddy Guy; alt-rock gods J Mascis and Kurt Cobain; more recent guitar heroes like Courtney Barnett, beabadoobee, and H.E.R. …the list goes on. In addition, Hunter explores the work of the award-winning Fender Custom Shop and the guitars produced there.

Illustrated throughout with rare images from company archives, Fender 75 Years treats readers to rare behind-the-scenes views of the shop floor throughout the years, studio imagery of the guitars, rare period advertising and brochures, and performance images of Fender players.

It’s the definitive look at the Fender’s first three-quarters of a century and a must-have for every guitar enthusiast.

Dave Hunter is an author, musician, and journalist. He is the author of several popular books about guitars, amps, and effects, including Voyageur Press's Star Guitars, The Fender Stratocaster, The Gibson Les Paul, and 365 Guitars, Amps & Effects You Must Play. A regular contributor to Guitar Player and Vintage Guitar magazines, he resides in Portsmouth, New Hampshire.

"...a concise yet thorough and visually stunning celebration of Fender...a fantastic read for guitarists of all likes from beginners to collectors."

"What stands out about this book, besides the tweed dust cover, is the great job Hunter did on keeping the book entertaining throughout and the impressive behind-the-scenes photos of Fender staffers back in the beginning."—American Songwriter