Corvette 70 Years: The One and Only (Hardcover) 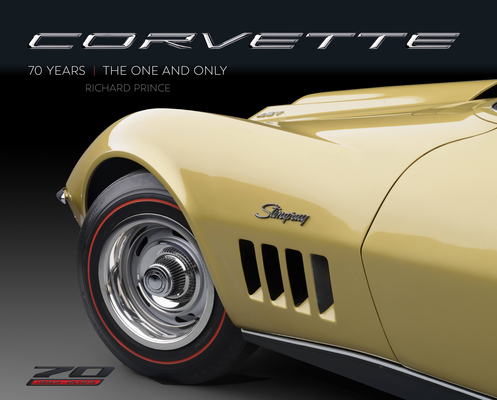 There’s something for every enthusiast in Corvette 70 Years, from the classic early-generation models, to the legendary race cars, to the latest stunning mid-engine C8. Climb in and fasten your seat belt.

Chevrolet’s Corvette is one of the most influential and iconic American automobiles in history, holding the mantle of America’s sports car across seven decades. In Corvette 70 Years: The One and Only, author Richard Prince offers a richly illustrated and detailed book that captures the full story of one of these legendary automobiles. Beautiful, contemporary photos and rare historical images accompany in-depth analyses of milestone cars and events. Notably, the story is told through the lens of the three dozen most influential Corvettes representing all eight generations, including the:

Created with the cooperation of General Motors, the book brings to light the engineering and design stories behind one of GM's most famous cars, as well as its key players. Comprising a unique perspective on a motoring legend, Corvette 70 Years truly is the one and only.

Richard Prince has been immersed in the Corvette hobby since the 1970s. He owned and operated a full-service Corvette restoration shop from 1988 to 1995 and has been writing about and photographing Corvettes since 1991. He has authored two Corvette buyer’s guides for Motorbooks, and his work has appeared in more than 400 publications. Prince’s corporate photography clients include Aston Martin, Audi, Bentley, Buick, Cadillac, Chevrolet, Ferrari, Jaguar, Lexus, Lotus, Mazda, Mercedes-Benz, and Peugeot.

"...a lavish love letter to a model Prince has cherished since he was a boy...Prince’s detailed approach to the subject yields fresh insights."—Car and Driver

."..it is sure to satisfy the 'Vette buff in your life (even if that person is you)."—Bloomberg.com