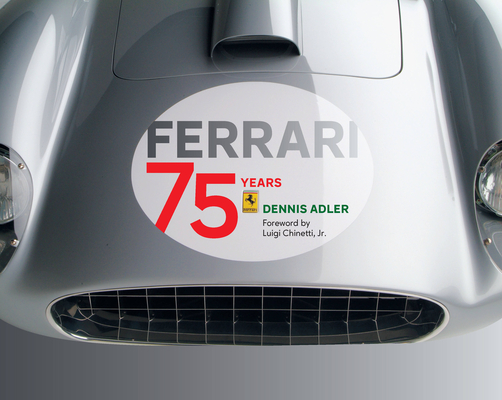 Celebrate 75 years of Ferrari with this complete, fascinating, and stunningly illustrated history highlighting the company’s legendary sports cars and their worldwide influence.

A stellar combination of beauty, engineering, racing success, exclusivity, and Italian flair combine to make Ferrari the world’s most legendary carmaker. All these traits coalesce in the form of Ferrari’s road cars. No other sports car manufacturer has so consistently set the bar for style and performance. It’s a near unbroken 75-year run of automotive hits:

For 75 years, Ferrari has created high-performance automotive works of art to fire the imaginations of car lovers and performance enthusiasts the world over. Ferrari: 75 Years provides an inspiring and illuminating look back at this history.

Award-winning author, photographer, and historian Dennis Adler is recognized as one of America's most published authors and historians. He has been seen on Good Morning America, The Today Show, and CBS Sunday Morning. The author of thirty-seven books on collectible cars and historic firearms, as well as a former magazine editor, Adler has had more than five thousand articles and photographs published during his 35-year career.

“Ultimately, Ferrari: 75 Years provides an inspiring and illuminating look back at Enzo Ferrari and the company that became his legacy. The forward by Luigi Chinetti Jr. is especially illuminating; it’s a mini history all by itself.”
—Supercars.net