1808: The Flight of the Emperor: How a Weak Prince, a Mad Queen, and the British Navy Tricked Napoleon and Changed the New World (Hardcover) 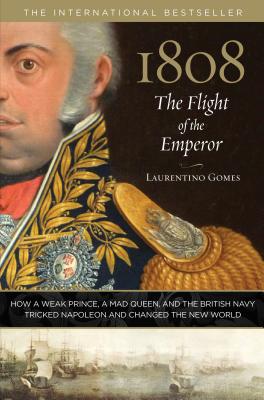 In a time of terror for Europe's monarchs--imprisoned, exiled, executed--Napoleon's army marched toward Lisbon. Cornered, Prince Regent Jo o had to make the most fraught decision of his life. Protected by the British Navy, he fled to Brazil with his entire family, including his deranged mother, most of the nobility, and the entire state apparatus. Until then, no European monarch had ever set foot in the Americas. Thousands made the voyage, but it was no luxury cruise. It took two months in cramped, decrepit ships. Lice infested some of the vessels, and noble women had to shave their hair and grease their bald heads with antiseptic sulfur. Vermin infested the food, and bacteria contaminated the drinking water. Sickness ran rampant. After landing in Brazil, Prince Jo o liberated the colony from a trade monopoly with Portugal. As explorers mapped the burgeoning nation's distant regions, the prince authorized the construction of roads, the founding of schools, and the creation of factories, raising Brazil to kingdom status in 1815. Meanwhile, Portugal was suffering the effects of abandonment, war, and famine. Never had the country lost so many people in so little time. Finally, after Napoleon's fall and over a decade of misery, the Portuguese demanded the return of their king. Jo o sailed back in tears in 1821, and the last chapter of colonial Brazil drew to a close, setting the stage for the strong, independent nation that we know today, changing the New World forever.