Egyptology: Search for the Tomb of Osiris (Ologies) (Hardcover) 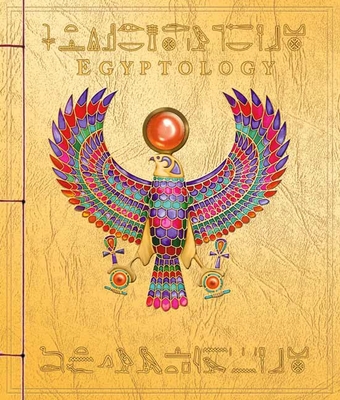 Discover the wonders of ancient Egypt through a fascinating journal from a lost expedition — a treasure trove of fact and fantasy featuring a novelty element on every spread.

Who can resist the allure of ancient Egypt — and the thrill of uncovering mysteries that have lain hidden for thousands of years? Not the feisty Miss Emily Sands, who in 1926, four years after the discovery of King Tut's tomb, led an expedition up the Nile in search of the tomb of the god Osiris. Alas, Miss Sands and crew soon vanished into the desert, never to be seen again. But luckily, her keen observations live on in the form of a lovingly kept journal, full of drawings, photographs, booklets, foldout maps, postcards, and many other intriguing samples. Here are just a few of Egyptology'sspecial features:

— an extravagantly gilded cover, featuring a raised Horus hawk pendant with three encrusted gems
— a playable game of Senet — ancient Egyptian checkers — including board, pieces, original-style dice, and rules
— a souvenir booklet showing how to read simple hieroglyphs
— a scrap of textured "mummy cloth"
— a facsimile of the gilded mummy mask of King Tut
— a gilded eye-of-Horus amulet with a "jewel" at the end

Rich with information about life in ancient Egypt and peppered with Miss Sands's lively narration, Egyptology concludes with a letter from the former Keeper of Antiquities at the British Museum, explaining which parts of this unique tale may be accepted as fact, which are guided by legend, and which reflect the author's delightful sense of fancy.

Dugald Steer has written many books for children including the best-selling Dragonology and its companion, The Dragonology Handbook, as well as the forthcoming Wizardology. For ten years he was an editor at Templar Publishing in England, but he now devotes himself full-time to writing. Other books he has written include, The Night Tiger, Just One More Story, and Picture This . . . (with Alison Jay). For the moment, though, it seems more "ologies" are in the offing.

Nghiem Ta, Artistic Direction: Nghiem Ta works as a designer and paper-engineer at Templar where she has overseen the creation of the best-selling Dragonology and Egyptology, as well as the forthcoming Wizardology. Prior to working with Templar, she spent four years with pop-up maestro Ron van der Meer. Her current projects include more books with "ology" in the title.

Ian Andrew, Artist: Ian Andrew created the black and white pencil illustrations for Egyptology and The Egyptology Handbook. He is an accomplished animator having worked on the animated film, "Dolphins" which won several awards including Best Newcomer at the Zagreb Film Festival. He has illustrated many books for children including Jim's Lion by Russell Hoban and Tell Me One Thing, Dad by Tom Pow.

Nick Harris, Artist: Nick Harris created the large color illustrations in Egyptology on his computer. In addition to forays into animated TV advertising, he spent a spell working in the background department on the feature film, "Who Framed Roger Rabbit?" He has illustrated many books for children including the Smarties book Prize-winning Firework Maker's Daughter by Phillip Pullman.

Helen Ward, Artist: Helen Ward, who also worked on Dragonology, painted the many color recreations of Ancient Egyptian statues, wall paintings, and antiquities as well as the 1920s memorabilia that appear in Egyptology. Helen has also written a number of successful children's books including The Tin Forest and The Dragon Machine, both illustrated by Wayne Anderson.