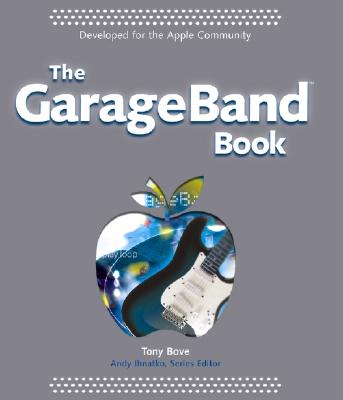 Do you want to bring out your recording artist within? Or do you just believe that life needs a soundtrack? Either way, GarageBand will turn your Mac into a recording studio, and when Tony and the Mac Man strt jammin' in these pages, you'll discover all the amazing things you can do with it. Learn to use loops, make tracks, play real or software instruments, mix and shape the sound, distribute your creations--and free the music you have inside.
* Offers insight from stars like Pete Sears, Jorma Kaukonen, Jack Casady, and Saturday Night Live bandleader G.E. Smith
* Covers MIDI keyboards, recording, mixing, using real instruments, managing music, and more
* Lavishly illustrated and loaded with anecdotes, tips, and ideas


"I've discovered a way you CAN live out your fantasies...
Everybody dreams of rock-and-roll glory. But what has held us back for lo these many years? A profound lack of God-given talent. GarageBand is the great leveler, and it's for everybody. Even if you wouldn't know what to do with a Rickenbacker 425 solidbody if Eric Clapton came to your house and personally beat you to death with one, GarageBand still welcomes you into the Family of Jam. You might not be as talented as the Music Gods...but at leat with GarageBand, you can have as much fun making music as they do."
--Andy Ihnatko.

Tony Bove has played harmonica since he was nine, in various bands you never heard of (such as the Graceful Duck, the Mystic Valley Ramblers, and the Great Next Whatever). But as a founding member of the Flying Other Brothers (www.flyingotherbros.com), Tony has recently performed with Hall-of-Fame rockers and now uses GarageBand to compose songs. Tony has kicked around the computer industry for decades, editing the influential Inside Report on New Media newsletter and writing for weekly and monthly magazines, including Computer Currents, Nextworld, The Chicago Tribune Sunday Technology Section, and NewMedia. He also cofounded and edited Desktop Publishing/Publish magazine. Computer trade shows and conferences were known for their informal music gatherings, and Tony was a founding member of Random Axes and other nerd-musician configurations at these events. When not playing music or doing all those other things, Tony found time to write 20 books on computing, desktop publishing, and multimedia, including The iLife '04 Book with Andy Ihnatko, iLife All-in-One Desk Reference For Dummies, and iPod and iTunes For Dummies with Cheryl Rhodes, and a series of books about Macromedia Director, Adobe Illustrator, and PageMaker. Tony has also worked as a director of enterprise marketing for a large software company and as a communications director and technical publications manager. (Got work? Look him up at his site, www.rockument.com/bove.html.) Tracing the personal computer revolution back to the Sixties counterculture, Tony went out on a limb and produced a CD-ROM documentary in 1996, Haight-Ashbury in the Sixties (featuring music from the Grateful Dead, Janis Joplin, and the Jefferson Airplane). Tony also developed the Rockument music site (www.rockument.com), with commentary and radio programs focused on rock music history. Andy Ihnatkohas been a leading voice in the Macintosh community for over fifteen years. Currently the Chicago Sun-Times' technology columnist, he contributes to numerous periodicals and is a favorite conference speaker.