Infomocracy: Book One of the Centenal Cycle (Hardcover) 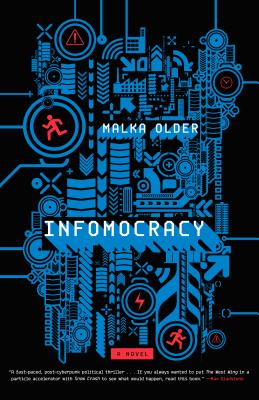 By Malka Older
This item is not available.
Out of Print

This is book number 1 in the The Centenal Cycle series.

It's been twenty years and two election cycles since Information, a powerful search engine monopoly, pioneered the switch from warring nation-states to global micro-democracy. The corporate coalition party Heritage has won the last two elections. With another election on the horizon, the Supermajority is in tight contention, and everything's on the line.

With power comes corruption. For Ken, this is his chance to do right by the idealistic Policy1st party and get a steady job in the big leagues. For Domaine, the election represents another staging ground in his ongoing struggle against the pax democratica. For Mishima, a dangerous Information operative, the whole situation is a puzzle: how do you keep the wheels running on the biggest political experiment of all time, when so many have so much to gain?

“A fast-paced, post-cyberpunk political thriller... If you always wanted to put The West Wing in a particle accelerator with Snow Crash to see what would happen, read this book.” —Max Gladstone, author of Last First Snow

"Smart, ambitious, bursting with provocative extrapolations, Infomocracy is the big-data-big-ideas-techno-analytical-microdemoglobal-post-everything political thriller we've been waiting for." —Ken Liu, author of The Grace of Kings

"In the mid-21st century, your biggest threat isn’t Artificial Intelligence—it’s other people. Yet the passionate, partisan, political and ultimately fallible men and women fighting for their beliefs are also Infomocracy’s greatest hope. An inspiring book about what we frail humans could still achieve, if we learn to work together." —Karl Schroeder, author of Lockstep and the Virga saga

MALKA OLDER is a writer, aid worker, and sociologist. Her science-fiction political thriller Infomocracy was named one of the best books of 2016 by Kirkus, Book Riot, and the Washington Post. The Centenal Cycle trilogy, which also includes Null States (2017) and State Tectonics (2018), is a finalist for the Hugo Best Series Award of 2018. She is also the creator of the serial Ninth Step Station, currently running on Serial Box, and her short story collection And Other Disasters will come out in December 2019. Named Senior Fellow for Technology and Risk at the Carnegie Council for Ethics in International Affairs for 2015, she has more than a decade of field experience in humanitarian aid and development. Her doctoral work on the sociology of organizations at Sciences Po Paris explores the dynamics of post-disaster improvisation in governments.

"Kinetic and gripping, the plot hurtles toward an electoral climax that leaps off the page." —NPR

"Futurists and politics geeks will love this unreservedly." —The New York Times Review of Books

"This brilliant book is unquestionably one of the greatest literary debuts in recent history." —The Huffington Post

"Far too messy to be utopian or dystopian, Older here raises all sorts of critical questions. I love this book; can’t wait to see what else she writes." —Ian Bremmer, author of The End of the Free Market and Superpower

"If you always wanted to put The West Wing in a particle accelerator with Snow Crash to see what would happen, read this book." —Max Gladstone, author of Four Roads Cross

"An inspiring book about what we frail humans could still achieve, if we learn to work together." —Karl Schroeder

"A futuristic world with eerie parallels to current events... [an] uncanny political thriller." —The Washington Post

"A frighteningly relevant exploration of how the flow of information can manipulate public opinion...timely and perhaps timeless." —Kirkus Starred Review

"Older’s sparkling debut, the first full-length novel from the novella-focused Tor.com imprint, serves as both a callback to classic futurist adventure tales by the likes of Brunner and Bester and a current examination of the power of information." —Publishers Weekly

"Micro-democracy has several things to recommend it, but the biggest strength of Older's writing is how clear-eyed she is on the fact that no system we can imagine will fix the problems of human nature, whether apathy or lust for power." —RT Reviews

"After sweeping you into a fascinating new world, Infomocracy will leave you with helpful ideas about what's happening in this one." —Annalee Newitz for Ars Technica

"Infomocracy has the slick language of Snow Crash, the complex global politics of Persona, and the chaotic storytelling of Moxyland. It’s bold as hell and never boring, practically dizzying." —Lightspeed

"Good science fiction delves not just into explorations of technology and the limits of human innovation, but the political implications of same, and Infomocracy does that extremely deftly." —XOJane

"With roots in noir and heels firmly planted in the present, Infomocracy shows a world that really isn’t too different from today. Malka Older has created a thrilling, breakneck novel with fully human characters. And it asks tough questions." —Electric Literature

"It’s a rare thing to find a book that accurately captures the mundane and insidious absurdity of politics, but Infomocracy gets it absolutely right. " —B&N Sci-Fi & Fantasy Blog

"Older's universe is fascinating, with its believable if cynical view of how politics might evolve in the information age. The pace is brisk with enough action for fans of political thrillers, but with plenty of futuristic touches for sf lovers." —Library Journal

"Science fiction for election nerds and for media geeks. I highly recommend it." —BookRiot