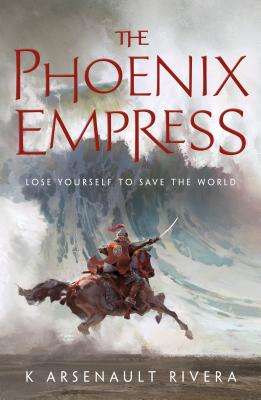 This is book number 2 in the Ascendant series.

Once they were the heirs to a prophecy that predicted two women would save an empire.

Now Shefali is dying—and her wife is unaware of the coming tragedy. Shizuka is too busy trying to reunite a fractured empire and right the wrongs of her ancestors.

As the Imperial Army gathers against a demonic invasion, Shizuka must do all she can with an empire on the brink of civil war.

K Arsenault Rivera was born in Mayaguez, Puerto Rico, but moved to New York when she was a toddler. When not managing a nutritional supplement store in Brooklyn, K is an avid participant in the roleplaying community, from which she drew inspiration for her debut novel, The Tiger’s Daughter. She currently lives in Brooklyn with her partner.

Praise for The Phoenix Empress

"The Tiger's Daughter was my favorite fantasy novel last year, telling the story of an epic quest through an original and engrossing perspective, and The Phoenix Empress expands and deepens the mysteries of this intricate and fully-realized fantasy world. I'm riveted by this story and can't wait for the next volume."—Martha Wells, author of the Hugo Award-winning Murderbot Diaries series

“The second entry in this epic fantasy series (after The Tiger's Daughter) continues the intense worldbuilding and time-hopping prose of the first... Engrossing and memorable.” —Library Journal

"The sweeping, lush love story between the Qorin warrior Shefali and the warrior empress Shizuka continues." —Booklist on The Phoenix Empress

Praise for The Tiger's Daughter

“Rich, expansive, and grounded in human truth. It is a story of star-crossed loves, of fate and power and passion, and it is simply exquisite." —V. E. Schwab, New York Times bestselling author of the Shades of Magic series

"K Arsenault Rivera turns many of the standard conventions of fantasy on their heads....A love letter... lavishly chronicling how two women fall in love.... thoughtfully rendered and palpably felt." —The Washington Post

"The Tiger’s Daughter sinks its claws into a reader and refuses to let them go until the very last page...As a word, ambitious sums up this debut." —Culturess