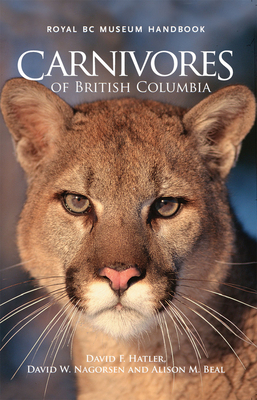 Humans share a long history with carnivores. We fear them as predators, revile them as competitors, exploit them for their fur, or admire them for their grace and beauty. This book, the fifth of six volumes on the mammals of BC, provides comprehensive, up-to-date information on the 21 species of wild terrestrial carnivores in the province. Species covered: Coyote, Grey Wolf, Red Fox, American Black Bear, Grizzly Bear, Northern Raccoon, Sea Otter, Wolverine, Northern River Otter, American Marten, Fisher, Ermine, Long-tailed Weasel, Least Weasel, American Mink, American Badger, Striped Skunk, Western Spotted Skunk, Cougar, Canada Lynx, Bobcat. Carnivores of British Columbia describes each species, with illustrations of animals and skulls. For each species it discusses distribution and habitat, feeding ecology, social behaviour, reproduction, issues around health and mortality, abundance, human uses, conservation and management. This book will be an important educational reference for the general public, schools, naturalists and wildlife biologists.

David Hatler is a wildlife biologist specializing in the study of carnivores. David Nagorsen is a biological consultant based in Victoria; he has written three handbooks published in the Mammals of BC series: Bats of BC (with R.M. Brigham), Opossums, Shrews and Moles of British Columbia and Rodents and Lagomorphs of British Columbia. Alison M. Beal is a researcher and writer of popular articles and other material about furbearers and trapping.