Victorian Women and the Theatre of Trance: Mediums, Spiritualists and Mesmerists in Performance (Paperback) 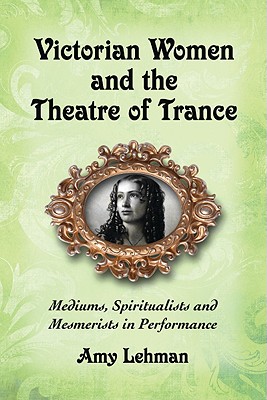 By Amy Lehman
This item is not available.

Spiritualists in the nineteenth century spoke of the Borderland, a shadowy threshold where the living communed with the dead, and where those in the material realm could receive comfort or advice from another world. The skilled performances of mostly female actors and performers made the Borderland a theatre, of sorts, in which dramas of revelation and recognition were produced in the forms of seances, trances, and spiritualist lectures. This book examines some of the most fascinating American and British actresses of the Victorian era, whose performances fairly mesmerized their audiences of amused skeptics and ardent believers. It also focuses on the transformative possibilities of the spiritualist theatre, revealing how the performances allowed Victorian women to speak, act, and create outside the boundaries of their restricted social and psychological roles.

Amy Lehman has presented research on the theatrical aspects of 19th-century spiritualism at theatre and Victorian studies conferences in the United States and abroad. She is currently on the faculty of the Department of Theatre and Dance at the University of South Carolina.