All in the Family: The Show that Changed Television (Hardcover) 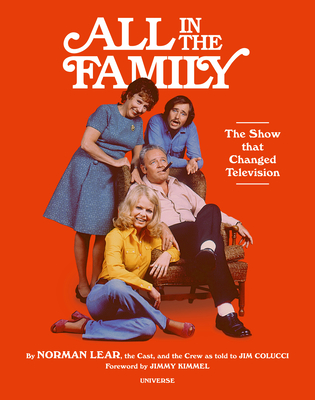 All in the Family creator Norman Lear takes fans behind the scenes of the groundbreaking sitcom on the occasion of its 50th anniversary.

The face of television was changed forever in 1971 with the premiere of All in the Family. The working-class Bunker family of Queens, New York—lovable bigot Archie (Carroll O'Connor), his long-suffering “dingbat” wife Edith (Jean Stapleton), their liberal daughter Gloria (Sally Struthers), and son-in-law Mike "Meathead" Stivic (Rob Reiner)—instantly became, and half a century later still are, four of the most iconic characters in television.
In All in the Family: The Show that Changed Television, Norman Lear shares his take on fifty essential episodes that exemplify why the show remains as funny and relevant as ever. Its boundary-pushing approach to hot-button topics is examined with commentary from co-stars O’ Connor, Stapleton, Reiner, and Struthers, as well as writers, directors, and guest stars from the show.
With previously unseen notes from Lear, script pages, production designs, and a foreword by super-fan Jimmy Kimmel, this book is the ultimate companion to the seminal series and a must for fans of Lear’s shows and television comedy.
“Norman Lear,” said New Yorker critic Michael Arlen, “has a feel for what people want to see before they know they want to see it.” All in the Family, like all of the Lear shows that followed, was a turning point in television’s handling of taboo subjects such as race relations, feminism, homosexuality, war, religion, gun control, social inequity, and other controversial subjects, all of which remain in the news today.