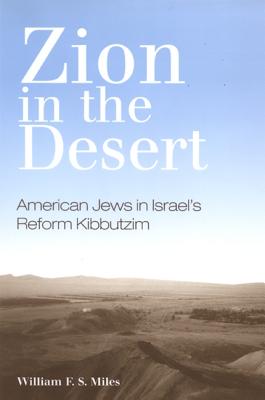 Zion in the Desert speaks to the millions of Jewish American baby boomers who at one time in their youth flirted with moving to Israel and may still wonder: "What would have happened to me? Who would I have become?" These questions are particularly poignant at a time when many American Jews are reassessing the role of Israel as a model state for the Jewish people. This book helps them encounter, beyond the numbing headlines of Middle East conflict, their middle-aged alter egos. William F. S. Miles explores these core questions of identity by following a group of young American Jews--including one of his own Long Island high school classmates--who in the 1970s and 1980s established the only two Reform Movement kibbutzim in Jewish history. Miles provides a firsthand account of these young pioneers, who were not only drawn to Israel out of post-Holocaust Zionism, but were also inspired by the progressive spirituality of Reform Judaism and the enticements of communal living to settle utopian kibbutzim in the remote Israeli desert. Zion in the Desert illustrates who these people have become a quarter of a century later and what their lives say to their fellow non-Orthodox brethren who once toyed with the idea but never made the Zionist and kibbutz leap.

William F. S. Miles is Professor of Political Science at Northeastern University and the author of many books, including Bridging Mental Boundaries in a Postcolonial Microcosm: Identity and Development in Vanuatu and Imperial Burdens: Countercolonialism in Former French India.