For the End of Time: The Story of the Messiaen Quartet (Paperback) 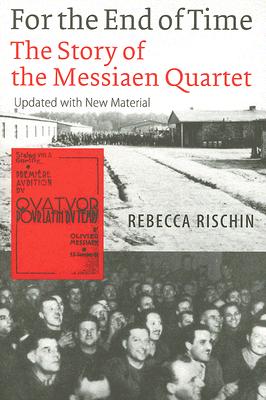 The clarinetist Rebecca Rischin has written a captivating book.... Her research dispels several long-cherished myths about the 1941 premiere.... Rischin lovingly brings to life the other musicians-- tienne Pasquier, cellist; Henri Akoka, clarinetist; and Jean Le Boulaire, violinist--who played with Messiaen, the pianist at the premiere.--Alex Ross, The New Yorker This book offers a wealth of new information about the circumstances under which the Quartet was created. Based on original interviews with the performers, witnesses to the premiere, and documents from the prison camp, this first comprehensive history of the Quartet's composition and premiere held my interest from beginning to end.... For the End of Time touches on many things: faith, friendship, creativity, grace in a time of despair, and the uncommon human alliances that wartime engenders.--Arnold Steinhardt, Chamber MusicThe clarification of the order of composition of the movements is just one of the minor but cumulatively significant ways in which Rischin modifies the widely accepted account of the events at Stalag VIII A.... For the End of Time is a thorough and readable piece of investigative journalism that clarifies some important points about the Quartet's genesis.--Michael Downes, Times Literary Supplement The premiere of Olivier Messiaen's Quartet for the End of Time on January 15, 1941, has been called one of the great stories of twentieth-century music. Composed while Messiaen (1908-1992) was imprisoned by the Nazis in Stalag VIII A, the work was performed under the most trying of circumstances: the temperature, inferior instruments, and the general conditions of life in a POW camp.Based on testimonies by the musicians and their families, witnesses to the premiere, former prisoners, and on documents from Stalag VIII A, For the End of Time examines the events that led to the Quartet's composition, the composer's interpretive preferences, and the musicians' problems in execution and how they affected the premiere and subsequent performances. Rebecca Rischin explores the musicians' life in the prison camp, their relationships with each other and with the German camp officials, and their intriguing fortunes before and after the momentous premiere. This paperback edition features supplementary texts and information previously unavailable to the author about the Quartet's premiere, Vichy and the composer, the Paris premiere, a recording featuring Messiaen as performer, and an updated bibliography and discography.

Rebecca Rischin is Associate Professor of Music at Ohio University in Athens. Her research for this book was aided by a Harriet Hale Woolley Scholarship for study in Paris, awarded in 1993 to only two other American artists and musicians. Rischin is an award-winning clarinetist who performs regularly throughout the United States and Europe.