Endgame 1758: The Promise, the Glory, and the Despair of Louisbourg's Last Decade (France Overseas: Studies in Empire and Decolonization) (Paperback) 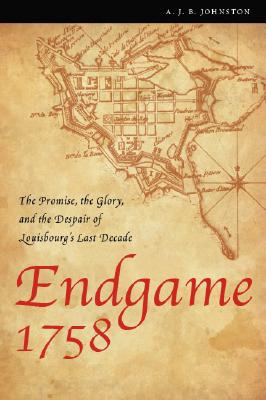 The story of what happened at the colonial fortified town of Louisbourg between 1749 and 1758 is one of the great dramas of the history of Canada, indeed North America. The French stronghold on Cape Breton Island, strategically situated near the entrance to the Gulf of St. Lawrence, was from soon after its founding  a major possession in the quest for empire. The dramatic military and social history of this short-lived and significant fortress, seaport, and community, and the citizens who  made it their home, are woven together in A. J. B. Johnston’s gripping biography of the colony’s final decade, presented from both French and British perspectives.  Endgame 1758 is a tale of two empires in collision on the shores of mid-eighteenth-century Atlantic Canada, where rival European visions of predominance clashed headlong with each other and with the region’s Aboriginal peoples. The magnitude of the struggle and of its uncertain outcome colored the lives of Louisbourg’s inhabitants and the nearly thirty thousand combatants arrayed against it. The entire history comes to life in a tale of what turned out to be  the first major British victory in the Seven Years’ War. How and why the French colony ended the way it did, not just in June and July 1758, but over the decade that preceded the siege, is a little-known and compelling story.

A. J. B. Johnston is a longtime historian with Parks Canada. He is the author of numerous books, including Storied Shores: St. Peter’s, Isle Madame, and Chapel Island in the Seventeenth and Eighteenth Centuries; Control and Order: The Evolution of French Colonial Louisbourg, 1713–1758; and Life and Religion at Louisbourg, 1713–1758.

"For Johnston, a longtime historian with Parks Canada, Endgame 1758 is a fitting capstone to a career devoted to French colonial Louisbourg, and of all the author’s books the one most obviously written with a cross-over audience in mind. The prose is often appropriately dramatic, and colourful individuals and narrative drive play a greater role than in Johnston’s earlier work, which of necessity is more quantitative and analytical in nature."—Philip Girard, Literary Review of Canada

"Based on exhaustive and meticulous research in French, British and British and French colonial records, [Endgame 1758] successfully places the events leading to the fall of Louisbourg within the mid-18th-century Atlantic world. Johnston uses his well-sustained chess metaphor to carefully reconstruct the movement of opposing fleets, military strategies and engagements that form the central focus of the monograph. . . . While offering a wealth of rich detail about the naval and military engagements that led to the final defeat of Louisbourg as well as the social and commercial aspects of life in the fortified town, it is a highly readable book."—Canadian Historical Association

"Johnston makes full use of the array of new and older resources in his Endgame 1758. In a well written, balanced, and researched analysis, he puts that campaign in a historic, cultural, and strategic context. . . . A very welcome and needed addition to the literature on the French and Indian War."—William Nester, Journal of Military History

"Johnston's excellent research reveals much about this isolated outpost that was so crucial to the leaders of Europe's most powerful countries for the duration of this one eventful decade."—David T. Flaherty, American Review of Canadian Studies

"No scholar could be better qualified to recount the final years of France's great North American fortress and naval base than A. J. B. Johnston. . . . Johnston's research is exhaustive and impeccably grounded in French and British primary sources; his prose is lucid; his interpretations are modest, plausible, and humane. His account of Louisbourg's fall will remain the standard narrative for a long, long time."—Fred Anderson, American Historical Review

"A. J. B. Johnston's Endgame 1758, combined with his Life and Religion at Louisbourg, 1713–1758 (1996), constitutes the definitive modern study of the social and military career of France's colonial Cape Breton fortress and town."—Reginald C. Stuart, Journal of American History