I Shall Be Near to You (Hardcover) 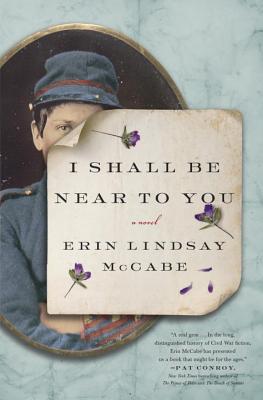 An extraordinary novel about a strong-willed woman who disguises herself as a man in order to fight beside her husband, inspired by the letters of a remarkable female soldier who fought in the Civil War.
Rosetta doesn't want her new husband Jeremiah to enlist, but he joins up, hoping to make enough money that they'll be able to afford their own farm someday. Though she's always worked by her father's side as the son he never had, now that Rosetta is a wife she's told her place is inside with the other women. But Rosetta decides her true place is with Jeremiah, no matter what that means, and to be with him she cuts off her hair, hems an old pair of his pants, and signs up as a Union soldier.
With the army desperate for recruits, Rosetta has no trouble volunteering, although she faces an incredulous husband. She drills with the men, proves she can be as good a soldier as anyone, anddeals withthe tension as her husband comes to grips with having a fighting wife. Rosetta's strong will clashes with Jeremiah's while their marriage is tested bybroken conventions, constant danger, and war, and she fears discovery of her secret even as they fight for their future, and for their lives. Inspired by more than 250 documented accounts of the women who fought in the Civil War while disguised as men, "I Shall Be Near To You" is the intimate story, inRosetta's powerful and gorgeous voice, of the drama of marriage, one woman's amazing exploits, and the tender love story that can unfold when two partners face life's challenges side by side.

ERIN LINDSAY McCABE studied Literature at University of California, Santa Cruz, and taught high school English before completing her MFA at St. Mary's College of California in 2010. She has taught Composition at St. Mary's and Butte College and resides in Northern California with her husband and son and a small menagerie that includes one dog, four cats, two horses, ten chickens, and two goats.

“A girl as tough as Katniss Everdeen. A romance out of Twilight. A historical backdrop as strong as Cold Mountain. These things combine in the extraordinary story of Rosetta Wakefield, a young woman from rural New York who follows her childhood sweetheart, Jeremiah, into the Civil War… McCabe makes every sentence count, with a narrative full of authentic dialogue, historical realism, and great feeling. Loosely based on true events, including the letters of the more than 200 women who are known to have served as men in the Civil War, this beautiful novel is literary but will have crossover appeal for more sophisticated YA readers as well, who will find Rosetta an unforgettable heroine.” —Booklist, starred review

“McCabe has created a tough, realistic woman who is equally committed to being a good soldier and a good wife. I Shall Be Near to You is both a poignant love story and a gritty war experience, and is highly recommended.” —Historical Novels Review

“A real gem…In the long, distinguished history of Civil War fiction, Erin Lindsay McCabe has presented us a book that might be for the ages. Her novel, I Shall Be Near to You, tells a passionate love story that moved me as much as I’ve been moved in years. Her heroine, Rosetta Wakefield, is as compelling a warrior as any that appears in Michael Shaara’s great novel about Gettysburg, The Killer Angels. Rosetta is a magnificent creation and lets us know that the people of the North had the same attachment to their land as any Southerner ever did.  If you don’t like this book, you don’t like to read.”
—Pat Conroy, New York Times bestselling author of The Prince of Tides and The Death of Santini

“A gripping story, and McCabe's writing gives it considerable impact; I Shall Be Near to You is a memorable addition to the literature of the Civil War.” —San Jose Mercury News

"I Shall be Near to You is one of the most enjoyable, thought provoking, well-written books I have read in a long time. . . The power of the story lies in the richness of character development, especially “Ross” Wakefield. The relationships and emotions are timeless. The historic details delivered a punch to the gut concerning the reality of war. I Shall be Near to You is everything the publishers claim—a must read.” —Civil War Courier

“Quietly fierce debut…McCabe's strength clearly lies in creating characters of emotional depth and complexity. Rosetta's determination and frank yet graceful voice will mesmerize readers…A story set during the Civil War that is timeless in its exploration of love, bravery and the struggle to find individuality in a world of convention.” —Shelf Awareness, starred review

"Erin Lindsay McCabe has given us an unforgettable tale of the power of love and commitment over war and all that comes with it. She breathes life and heart into Rosetta, a young bride who struggles to find her own footing in a marriage too new to have much of a footing at all, as Rosetta chooses to follow Jeremiah into war and into what will prove to be the horror and the richness of a life lived in the fullest."
—Robert Hicks, New York Times bestselling author of The Widow of the South and A Separate Country

“Erin McCabe’s I Shall Be Near to You is a beautiful book, a historical novel inspired by the more than 200 women who disguised themselves as men to serve in the Civil War.  It is a touching, emotional story that reminds us that in different times and in entirely different circumstances, we are all fighting for the same things.”
—Vanessa Diffenbaugh, New York Times bestselling author of The Language of Flowers

"I Shall Be Near to You marks the impressive debut of a truly gifted author. Erin Lindsay McCabe’s riveting story of a woman who disguises herself as a man to follow her husband into the Union army enthralls even as it wrenches the heart."
—Jennifer Chiaverini, author of Mrs. Lincoln's Dressmaker and The Spymistress

"Told in the unforgettable voice of Rosetta Wakefield, I Shall Be Near to You is one of those wonderful stay-up-late-to-devour-another-chapter novels. Erin Lindsay McCabe strikes the perfect balance of historical research and lyrically crafted prose. Through Rosetta's eyes, readers experience the horror and the humanity of daily life during the Civil War. This is a book you'll definitely want to read—and tell your best friend to read, too."
—Lois Leveen, author of The Secrets of Mary Bowser

"The spirited voice of McCabe's indelible Rosetta demands your attention from page 1 and captures your heart with her remarkable story. I fell hard for this courageous character and readers will too! Driven by fierce love, Rosetta exemplifies the timeless fighting spirit of womanhood. McCabe has done her homework well, mining Civil War secrets for this historical golden nugget. I laughed. I wept. I learned and will treasure always."
—Sarah McCoy, author of the international bestseller and 2012 Goodreads Choice Award nominee The Baker's Daughter

“Inspired by the actual letters of a woman who fought in the Civil War...McCabe offers a feminine perspective on a dark time in US history.” —Publishers Weekly

"McCabe has given us a memorable tale of love in the midst of war, loyalty and faith in the maelstrom of our nation's greatest tragedy."
—Howard Bahr, author of The Black Flower and winner of the Michael Shaara Award for Excellence in Civil War Fiction

“Erin Lindsay McCabe portrays all this with such empathy and credible detail that it feels like you are there alongside these youngsters, sharing their initial naiveté and growing awareness of what they have got themselves into…Don't miss I Shall Be Near to You - very highly recommended!” —BookLoons.com

“In addition to the immersive details about war and the portrayal of women's involvement, this novel is a love story. Rosetta's first-person narration paints a tender portrait of two lovers, desperate to stay together as the world contrives to tear them apart. …her spunky attitude and tenacity reveals a fascinating, appealing character. Rosetta is brave enough to choose her husband's love over a life of feminine conformity. McCabe's novel is an engrossing one, and her main character Rosetta is unforgettable.” —BookBrowse.com